Three blocks of my Patchwork of the Crosses top put together, that is. Three more of the border segments were finished as well. I needed a break from making the last two border segments but will finish them today. Seeing … END_OF_DOCUMENT_TOKEN_TO_BE_REPLACED

Last night I got the setting pieces added to one side of the first block and the first corner done. Once the first row is together, this will be a much faster process. And so far I’m staying focused. Staying … END_OF_DOCUMENT_TOKEN_TO_BE_REPLACED

The flannel fabric was taped to the wall after dinner last night and I started playing with block placements. It was very damp – unbelievably humid  – it was so damp the air felt like it could have been wrung out here … END_OF_DOCUMENT_TOKEN_TO_BE_REPLACED

Clippings from grading the seams of the 30 Patchwork of the Crosses blocks. Never ever again do I leave grading the seams until the end!  It took most of the weekend to get this done.There will be more to add … END_OF_DOCUMENT_TOKEN_TO_BE_REPLACED

There is going to be a slight delay in making more sunflowers. Why? Because I am determined to finish up my POTC quilt top. To that end, I’ve been adding the cream hexagons to the final six blocks that still didn’t … END_OF_DOCUMENT_TOKEN_TO_BE_REPLACED

There are still seven blocks to be completed and pressed, but two of those seven have been started. I’m working on these last ones slightly differently in that I’m starting out with groups of shapes that I think will work … END_OF_DOCUMENT_TOKEN_TO_BE_REPLACED

When I was printing the 1″ Inklingo 90-degree hexagons on fabrics for my Patchwork of the Crosses blocks, I printed more than I needed. That’s something I tend to do on purpose, as sometimes I get an idea and just want … END_OF_DOCUMENT_TOKEN_TO_BE_REPLACED

While I’m still about two weeks away from finishing the red and white top, I have been looking at the project boxes that litter the apartment — are scattered about — are neatly stacked, and found this box. Full of … END_OF_DOCUMENT_TOKEN_TO_BE_REPLACED

First up, the little tumbler star table runner that finishes at 12 x 48. I’m Not sure exactly how I’ll quilt this one, but it’s going to be pretty basic.

Second, the 24″ square tumbler star doll quilt. This one is going to be quilted, I think, to emphases the stars. 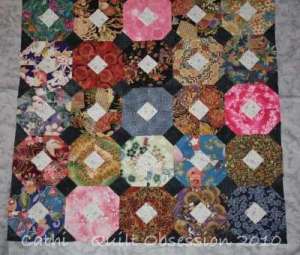 Third, China Plates. I think I’m going to do straight line quilting through the middle of the hexagons.

The fourth is the pink and red Winding Ways that finishes at 27″. I’m going to quilt to emphasize the circle effect. This one I should have done before now. It would be great  to have this one hanging around Valentine’s Day. Next year it will be!

All of them have the batting cut and ready and I’ll get the backings and bindings ready for them on Friday. I’m going to baste some temporary muslin borders on each of the four so that they’re large enough to put in the hoop and I can get right to the edges, although I may do the table runner without a hoop. I think that will work as long as I baste it well enough.

Why have I got all 4 of them out? Because I really want to get back to hand quilting the Ferris Wheel quilt, but would like to use these tops as my warm-up quilts.

Last night I designed yet another quilt in EQ but that’s it for a while. I need more stitching time! I’m almost three-quarters of the way through making one of the pieced borders for Scrappy Star. Once I get that done and added to the main body of the quilt, I’ll decide whether it needs the final pieced border I was thinking of adding.

Baxter is 10 months old today. He’s growing so fast now that we’re seeing changes in him almost daily and his silver markings are starting to show more and more.

Once the baby quilt is done, China Plates will be first in line for quilting.  It’s been languishing now for a few months, so it’s time to get this one finished and bound and ready to hang.  I made this with the 1.5″ 90-degree hexagon Inklingo collection printing the hexagons on a variety of Oriental prints, the centre squares on an Oriental shirting print and the connecting squares and triangles on a black fabric. I’m not quite sure how I want to quilt it yet, although I do have the thread picked out — a variegated YLI black/charcoal/cream thread.

There were a few questions about washing charms.  What does a salad spinner have to do with it?  Well, generally I just swish them in some warm soapy water, rinse them, hang them on a clothes horse for a few minutes and then iron them dry but sometimes spin them partially dry by throwing a handful in an old salad spinner and then complete the drying by ironing them.  I’m always amazed at just how much they do shrink — at least half an inch on one side so that the 5″ charms generally end up as 4.5″ x 5″ pieces rather than a 5″ square.

Four rows left to stitch on the baby quilt!  Aside from quilting China Plates and working on various other projects that are in varying stages, I’m daydreaming about starting a new quilt with stars.  While I am tempted to make something with bright batiks and a dark neutral, I’m also leaning towards doing something with the Japanese taupes that are in my stash and making a very muted star quilt with those.

On Tuesday, Lester was snoozing in the kitty bed — with a toy within paw’s reach. 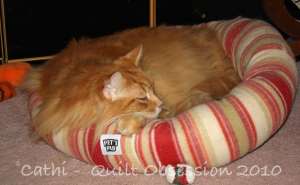 While Smudge was on the couch. 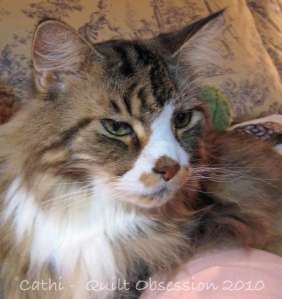