When I was printing the 1″ Inklingo 90-degree hexagons on fabrics for my Patchwork of the Crosses blocks, I printed more than I needed. That’s something I tend to do on purpose, as sometimes I get an idea and just want to play. Having the shapes already printed and cut out makes it easy to just grab a few and start stitching. This box has the extra 90-degree hexagons as well as some other shapes.

Another thing I like to do is to print extras of the 1″ squares whenever I print them for something specific. This box is crammed full. I’ve already made a stack of little 4-patch blocks from this box, although I have yet to figure out what I’m doing with them.

I’d been thinking about doing this with the extra hexagons for a while so last night I grabbed a few of the hexagons and a few of the 1″ squares and started putting this together. It may end up as nothing larger than a doll quilt, but it’s fun and easy stitching.

I’m grading the seams as I go and, because I finger press as I’m stitching, pressing it takes only a few seconds.

A 26″ wall quilt top was made using the 1.5″ 90-degree hexagons that I’ve called China Plates. All that’s left now is to quilt it. I have the batting cut, the backing’s ready and has been for some time. 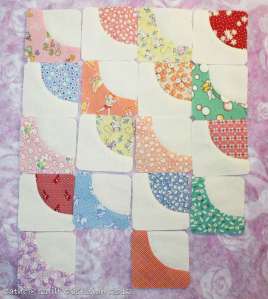 I wanted to get an idea of how long it’s going to take to finish making the little 2″ Drunkard’s Path blocks so I kept track of how long it took to get these blocks done. It was close to two hours to stitch the 18 little blocks. Now I only have 193 left to make. With any luck, I can get the 93 done so that it’s down to 100 sometime in the next week. I’m still playing with the idea of making this slightly larger than the original quilt but won’t make that decision until I get the 832 finished.

Baxtertoon, “How to Help Your Human, Lesson 5”

In the latest “How To Help Your Human” ‘toon, Baxter is giving a lesson on examining quilt blocks with a critical eye.

We’ve had this Cosmic Catnip Alpine Scratcher for years. Every cat we’ve had has loved this thing. As beat up as it is, it’s Baxter’s favourite too and he’ll often sleep with his head on it. Looks dreadfully uncomfortable to us, but no matter where we put this he goes looking for it. I tried moving it out of the living room, thinking that it was time to toss it, but he was looking for it. We’ve looked and it doesn’t appear these are for sale any longer so, no matter how decrepit it looks, it stays.

10 thoughts on “Playing With Inklingo Shapes”