The project box is empty. And just waiting for the next project that needs to be kept in a pretty round project box. There are some pieces left over which are going to be put in the bits for labels box. Yes, I … END_OF_DOCUMENT_TOKEN_TO_BE_REPLACED

This is totally unlike me, as you know if you’ve read my blog for any length of time, but I am staying engrossed in just one project. And am I ever making progress. Springtime in Paris is one-quarter finished. Slightly … END_OF_DOCUMENT_TOKEN_TO_BE_REPLACED

The stack of 90 rosy towers. All ready to be stitched to melons which means the fun is about to really begin — nothing but lovely curved piecing. Every one of them has been pressed and the seams graded. If you click … END_OF_DOCUMENT_TOKEN_TO_BE_REPLACED

I’ve been busy. And have made this many more rosy towers to add to the … … growing stack of them. Which really is growing when I look at them side by side with the empty spool beside them. And the … END_OF_DOCUMENT_TOKEN_TO_BE_REPLACED

Where did I go? To stitch more and more of these. The stack of finished rosy towers is growing. But there are many more yet to be stitched. I’m really, really hoping I get this stack finished this week because … END_OF_DOCUMENT_TOKEN_TO_BE_REPLACED

This is what I’ve been doing for the past few days.  Stitching loads and loads of rosy towers around squares for the Springtime in Paris quilt. And grading the seam allowances. I decided to do all the stitching of towers … END_OF_DOCUMENT_TOKEN_TO_BE_REPLACED

When I made one block last week, I really didn’t intend to make another right away but I couldn’t resist. They are fun to stitch. Doesn’t hurt that it means I’m working with my favourite shabby chic fabrics again and that this block has it all — curved piecing and continuous stitching.

After pressing all the seams in one direction the block lies flat as can be and the back looks almost as good as the front.

After what seems like a long cool and damp spring, we are in the midst of a mini heat wave.  Yesterday was gorgeous and hot.  Today the forecast is for a humidex reading somewhere in the high 30s or even as much as 40C.  I’m not complaining after all those weeks of rainy cool weather.  In fact, if we don’t get thunderstorms this afternoon, I plan to spend some time out on the roof garden soaking up the warmth.

Smudge was quite content after his yogourt treat.  Mr. Q.O. is working on the video of him drinking.  As soon as it’s uploaded, I’ll post it.

When I finished Chintz Circles for my aunt last summer, I had it in the back of my mind that I would eventually make a lap quilt for us using the same sort of shabby chic fabrics.  At that time, … END_OF_DOCUMENT_TOKEN_TO_BE_REPLACED

As Chintz Circles is entered in this week’s contest at Quilting Gallery (and you can go vote here), I thought it might be sort of fun to look back at the process of making it. The picture above was taken almost immediately after I finished stitching down the binding but before it was washed.

But this is where it began back in late March of this year.  I used the Inklingo Orange Peel Deluxe collection to print all the Alabama Beauty shapes on the back of my fabrics, which makes a quilt like this so achievable!  No tracing of templates or worrying about matching points on curved seams — they were all there for me. Once I had determined I wanted to get that circle effect, I did have to be careful about my fabric placement.  When I got the first four blocks hand pieced by early April and saw the partial circles beginning to appear, I was thrilled. 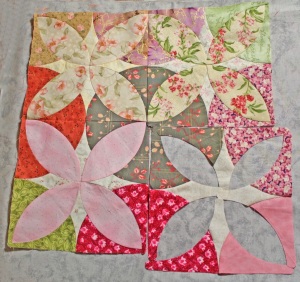 By April 7,  2 complete circles had appeared.

By April 12, a total of 6 circles had appeared. 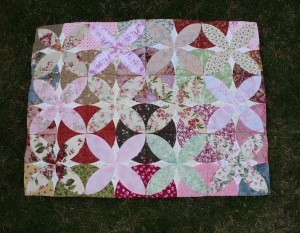 Adding rows took a bit longer the larger it got, but by May 18 there were a total of 16 circles:

By the time the middle of June rolled around, it was up to 24 circles:

By June 21 a total of 30 circles had appeared, the hand piecing was completed and the top was finished.

Then the backing was found, the quilt was basted and the machine quilting began. By July 19, I had started tacking down the binding and the next day the picture shown at the top of this post was taken.

Then came the best part.  On August 1, 2010 the quilt was presented to my aunt on her 90th birthday.

Making Chintz Circles was a true labour of love and I owe thanks to Karen Dianne whose post inspired me to make the circles the predominant feature and to Linda Franz, the inventor of Inklingo, which I think is the best thing to happen in quilting since the rotary cutter and without which I doubt very much that I would have ever made Chintz Circles.

If you’ve stayed with me to the end of this post, please go to Quilting Gallery and vote!  You can vote here.

Watching the circle appear as I joined the fourth block to the first three made me smile.  Now there’s no stopping me on this.  I love the look I’m getting with all these shabby chic fabrics.  Sort of like an old chintz print in an English cottage somewhere, I think.  Mr. Q.O. keeps looking at it and saying it looks old.  Just the look I’m after!

Putting this together is actually less of  a planning nightmare than I had anticipated.  The bonus of it is that, as I’m joining the blocks as I go, when I’m finished making the blocks the quilt top itself will be finished.  As I want a fair number of circles to appear, I think this will end up as a bed-sized quilt.  Maybe even king size.  That I’m not sure about yet.  But it will be large.

We had the most glorious weather on the weekend with highs in the mid to high 20s Friday and Saturday.  Sunday was mild as well.  Although we had fairly strong winds for a while on Saturday night, it wasn’t the heavy wind storm they initially predicted.  And no rain.  An absolutely perfect first long weekend of the spring/summer season.  The leaves on the crab apple trees on the roof garden are starting to make an appearance.

Smudge has been busy watching out the window with Lester.  We didn’t get a shot of him but Sunday he was very intent watching something.  Here he’s in an almost headless cat pose.

Lester relaxing Saturday night after a lot of watching out the window during the day.