Now that I have nine of these little 3″ Winding Ways variation blocks done, I’m tempted to make a lap quilt using these fabrics and blocks of this size. These blocks are destined for a mug rug but the temptation … END_OF_DOCUMENT_TOKEN_TO_BE_REPLACED

The Inklingo 12″ Winding Ways collection was released on the weekend and I immediately printed enough for one block. I initially thought I’d make a lap quilt using the large block in a different fabric but, as soon as I … END_OF_DOCUMENT_TOKEN_TO_BE_REPLACED

I am finding the Inklingo 3″ Deluxe Winding Ways blocks absolutely irresistible. So much so I had to make a couple with these little floral and soft green fabrics. This is one of the variations in the Deluxe collection – … END_OF_DOCUMENT_TOKEN_TO_BE_REPLACED

Over the holiday, I organized the Winding Ways shapes so that each 4.5″ block is now ready to stitch. There are four stacks of shapes waiting to be made into blocks in the box. Having them all organized makes it … END_OF_DOCUMENT_TOKEN_TO_BE_REPLACED

Last night, Mr. Q.O. named the quilt I’m making with the 4.5″ Winding Ways blocks. At first I wasn’t too sure about it, but decided I do like it — so it’s now named Harlequin Pastel. I made three more … END_OF_DOCUMENT_TOKEN_TO_BE_REPLACED

Last night another PIB came out to play – the 4.5 Winding Ways blocks in hand-dyed fabrics. I can tell that the block placement is going to take almost as long as stitching the blocks. They are such fun to … END_OF_DOCUMENT_TOKEN_TO_BE_REPLACED

I played and played with EQ over the weekend. Hopefully I’ll get this out of my system soon and be back to playing more with fabric! But this design is one that I will make. How could I possibly resist all that curved piecing of Winding Ways and Drunkard’s Path blocks? This coloration of it I’m calling Tiptoe Through the Tulips. Some of you may remember Tiny Tim singing Tiptoe Through the Tulips. I was giggling the whole time I was working on this design thinking about that.

Playing with designs in EQ has quickly become addictive. Saturday night I had to have an MRI and, as I am claustrophobic, took a rather strong tranquilizer. So as the machine made its infernal racket, rather than feeling like the walls were closing in, I was dreaming up this design. As soon as we got home, I started playing with it in EQ.

I guess you could say I am now well and truly hooked on Electric Quilt. I love that I can try out my ideas and see how they’re going to look before I start printing shapes on my fabrics. It’s just another great tool to have available. What’s perfect about it for me is that I can design a quilt using Inklingo shapes and then play with colours.

Baxter was very intent on getting to the yogourt on the spoon. If we don’t hold the spoon close enough, he’ll reach out with a paw and hook it around the stem of the spoon to drag it closer.

While I am still working on the pieced fourth border for Scrappy Star, starting to work with these pieces in earnest is what’s beckoning although it is still quite a ways off. I finally finished cutting all the Winding Ways pieces last week.

They are now nestled in their own box, just waiting until I can devote some serious stitching time to them.

But before that happens I have to not only finish the pieced fourth border for Scrappy Star but also the final pieced fifth and possibly sixth borders for it.

The pieces in this box will be incorporated into those pieced final border(s) for Scrappy Star.

Some interesting comments yesterday on the topic of pre-washing fabric. It seems like almost all those who left a comment have the same feeling; that it’s the dirt and chemicals that are the bigger concern than the possibility of bleeding.

Mr. Q.O. and Baxter have a game they play. Mr. Q.O. tosses Cappy, Baxter’s favourite toy, on to the windowsill. Baxter races over to grab it and then jumps back on the bed with it in his mouth. But yesterday? Yesterday, on one of the tosses, Cappy landed on the edge of the open window. Baxter apparently sat there for quite some time trying to decide if he’d grab it or not. Finally, he walked away. We rescued Cappy and all was well. 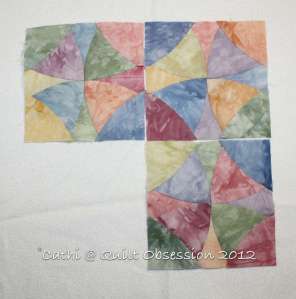 After seeing the circle almost appearing with six blocks done, I was determined to put together three more in order to see the full effect. These three were added to the group.

Then I laid them out together. I’m thrilled with how this is going to look. It will be fun arranging the blocks once they’re all done and watching the circles appear.

Tuesday was yet another gray and rainy day, but another mild one. We just saw our long-range forecast and it looks like it’s staying mild for the next couple of weeks.

Last night when I was stitching, I left my small scissors on the end table for a minute. The protective cover was on them. I turned around and Baxter had them, by the handles, in his mouth and was about to make off with them. As soon as he saw me looking at him, he dropped them. I wonder where he would have hidden them – probably with Mr. Q.O.’s pens.

Later he was reclining on the loveseat with his paws crossed. Mr. Q.O. grabbed the camera and we were lucky to get this shot as he moved seconds later. Mr. Q.O. captioned this one “The Lounge Lizard.”