After arranging, rearranging and rearranging some more, this is the almost final layout. I made a couple of changes to the last blocks on the 3rd, 4th and 5th rows after I took this picture but was so anxious to get started stitching that I forgot to take a picture after those changes were made. All the blocks have little pieces of paper pinned to them with their block & row number identified and are off the design wall now, ready to stitch together.

In fact, last night I got the blocks stitched together into the first two rows. Once the rows are stitched together the S’s will become more evident. I hope to finish putting the rows together tonight – there are two baseball games tonight, so loads of stitching time – and the centre of the quilt together by the time the weekend is through. Now I’m starting to think about border ideas. 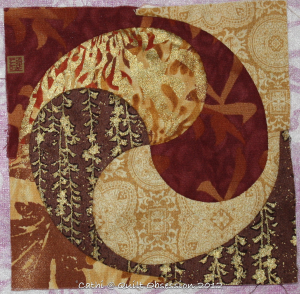 There is one extra block which will be part of the label for Memories of Smudge V.S.

The last two evenings, when not arranging and rearranging the Memories of Smudge blocks, I decided to do a few more of the little 2″ Drunkard’s Path units. Now there are 613 finished and only another 219 needed. I may end up making the quilt slightly larger, but I’ll decide that when the 832 units are finished. 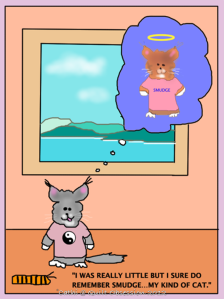 Today’s Baxtertoon made me almost teary-eyed. Baxter had only been home for a very few days before Smudge left us.

Mr. Q.O. captioned this one, “Hmm.” The leaves are really starting to fly by the window now and Baxter is very, very busy keeping his eye on them.

14 thoughts on “Memories of Smudge V.S.”