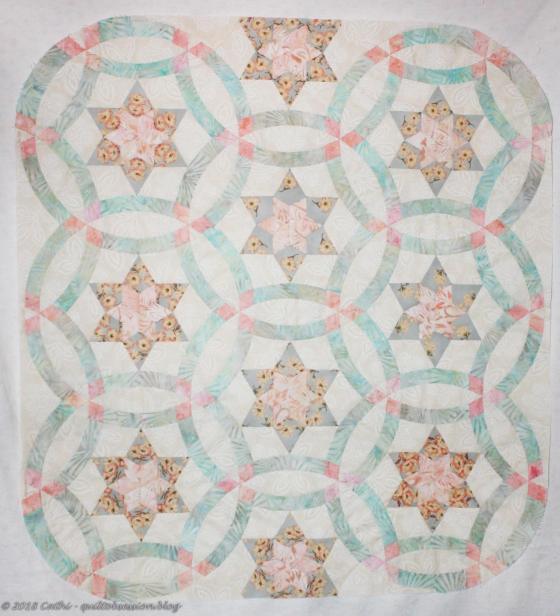 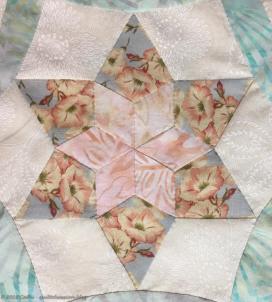 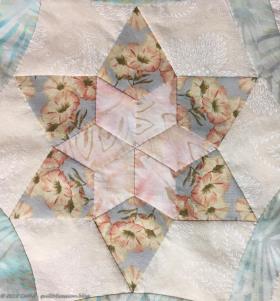 There are eight full stars in the centre of the rings of the little top, which I’ll show in groups of two starting with these two. 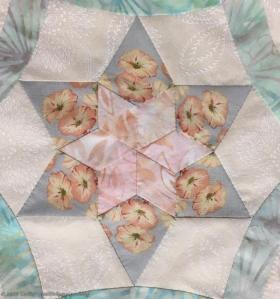 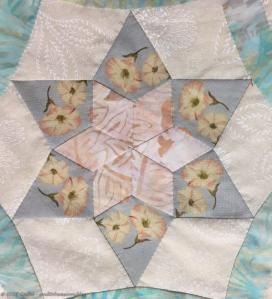 The second set of two. 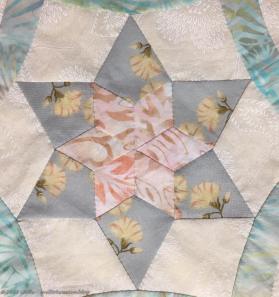 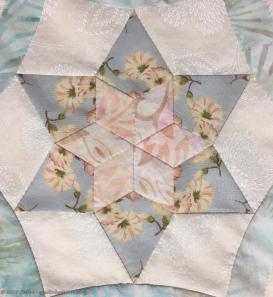 The third set of two. 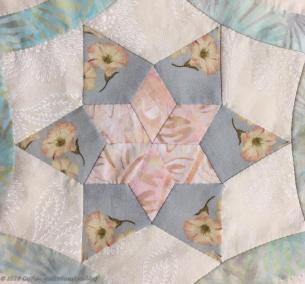 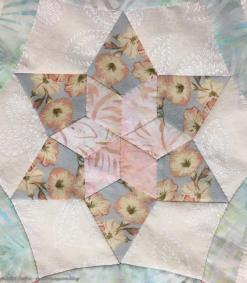 And the final set of two. 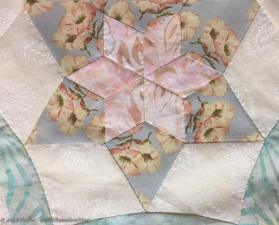 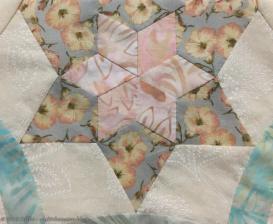 There are also two partial stars in the centre of the top and bottom of the little top. 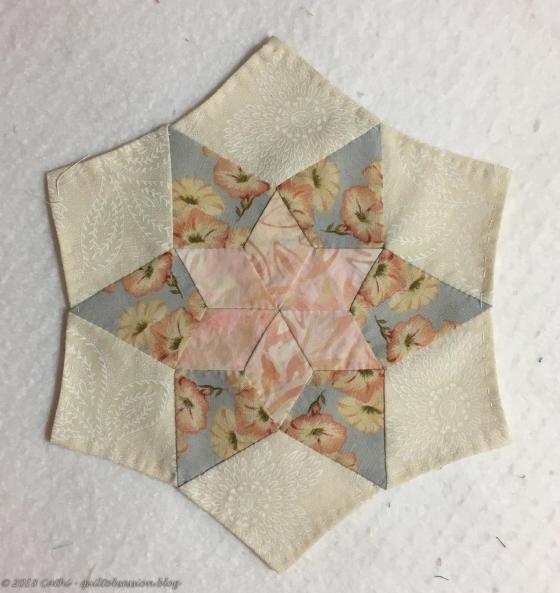 And, of course, I had to make a little label for it. I’ve basted under the seam allowance so it’s ready to appliqué on to the back when the little top is quilted. The biggest decision left to make is just what to bind it with. I’m wondering about using the floral that I used for the kites in the stars. I’ll have to put it right up against the arcs to see if that works. If not, then I’ll be looking for a pink that will work I suppose.

I loved making this little Golden Wedding Ring top. So I know it won’t be long before I get started on the Second Ringy Dingies top. 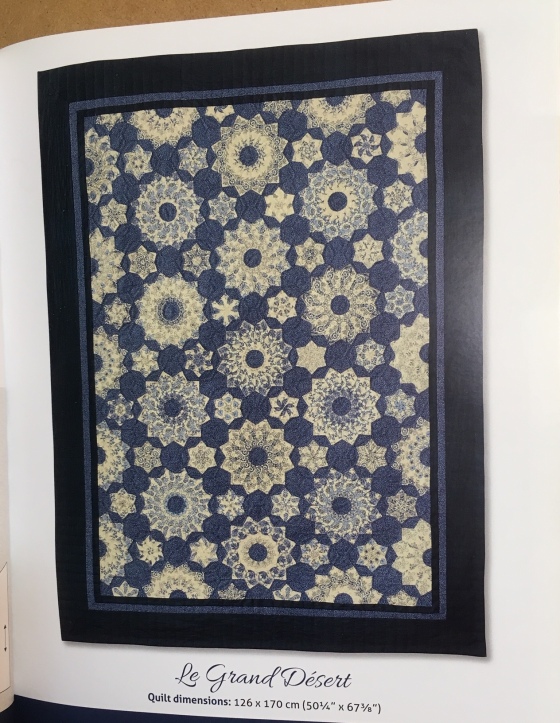 Except – and this is a huge except – there are four new Inklingo collections for this quilt from Millefiori Quilts 3 that I absolutely love – Le Grand Desert. When I first got Millefiori Quilts 3 that was the quilt that I fell in love with and wanted to make immediately. But there was no way I was attempting it without Inklingo to print the shapes. So when the new Inklingo collections were released last week for this glorious quilt, I was thrilled! Now I’m deciding whether to make a quilt that’s 75%, 125% or 150% as large as the original or stick with the original size for my blue version of Le Grand Desert. I have a plan to make a second quilt using some shapes from the largest collection and lots of pink and cream fabrics. I’ve already begun pulling pinks for that idea.

There is a blue and cream fabric that I’ve had in my stash forever, just waiting for the right project. I even have enough of it for 12 repeats for some fussy cutting/printing. When I first saw a picture of the quilt, I knew that the right project for this fabric was definitely Le Grand Desert. Now it’s a matter of finding the perfect deeper blue to go with it. I have a feeling this may take a bit of hunting. 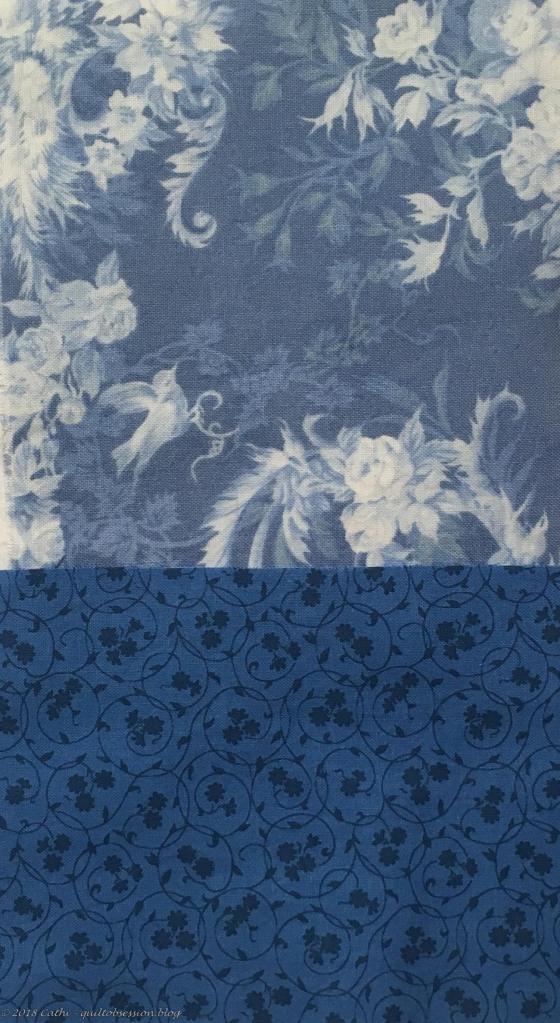 However, I have one darker blue that seems to work when I look at it in some light but not in others. I’ve looked at it under incandescent light, a daylight bulb, at the window in daylight and on and on. And I still can’t decide. So I’m going to make one small hexagon made up of kites and its surrounding shapes and decide. In this photo I am not sure that they work well together at all, but I’m really curious to see what I think when they’re cut up into small pieces and sewn back together. 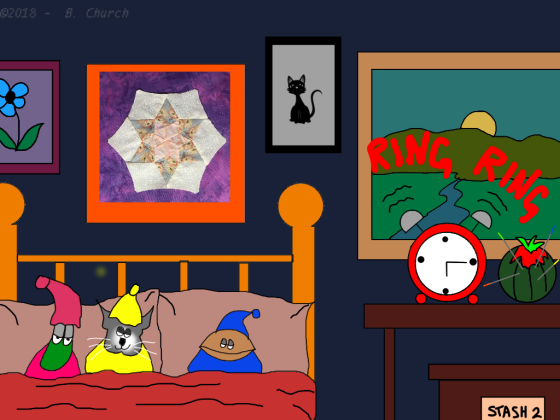 I know it has been ages since I’ve blogged. I’ve developed really dry eyes. Some days I feel like I’m drowning in eye drops trying to combat them. But I have learned that I need to really limit the amount of time I spend at the computer or looking at my tablet or phone. But I’m determined not to let my blog go quiet for so long. 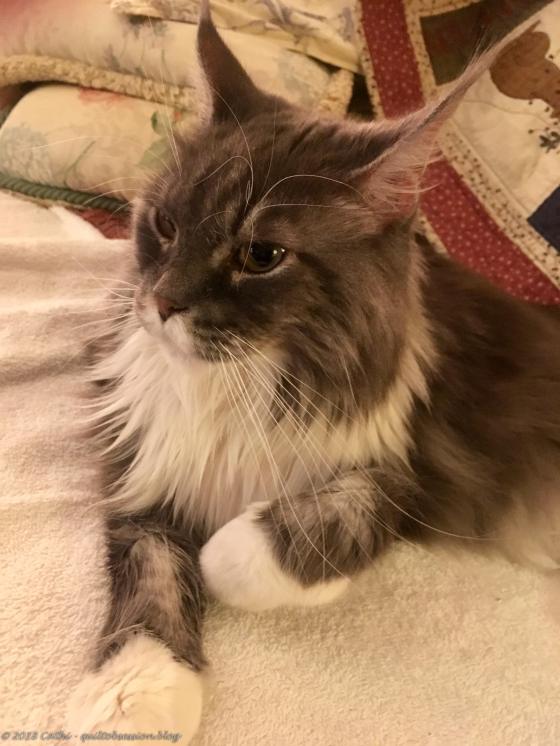 Baxter has been lounging more on the sofa lately. I love the look on his face in this photo.

12 thoughts on “One Ringy Dingy”

Leave a Reply to Jill B Cancel reply