I finished the second Not So Silent Garden block.

Pressed it. Graded the seams. But something just wasn’t working – my Not So Silent Garden needed to be more colourful and vibrant, not muted in any way. 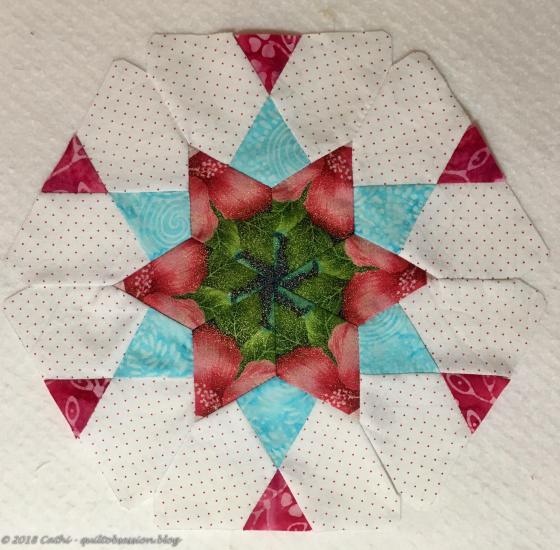 So back to one of my original choices I went and made one new Not So Silent Garden block using the blue batik I had initially thought of for the kites. This time I decided on a bright pink for the triangles and a background fabric for the hexagons that has a rosy pink tiny dot. And I was much, much happier with it. It’s definitely not silent in any way! 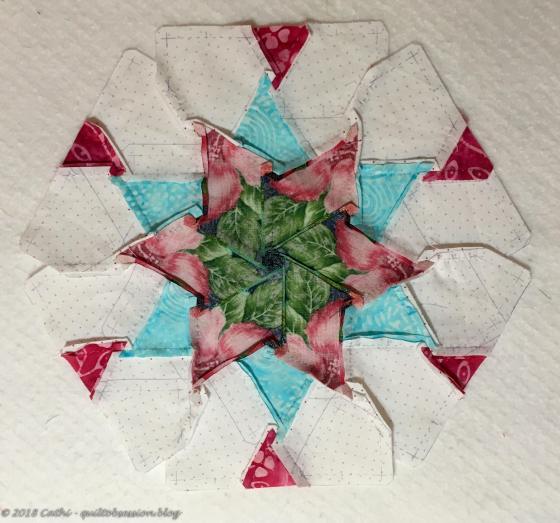 Pressed it. Graded the seams. I know, I know – you can see extra lines printed on the back of the irregular hexagons. When I printed that sheet of the hexagons, I immediately realized I had made a mistake by choosing to print in portrait mode rather than landscape but, as I know my ink will wash out, I wasn’t worried and just reprinted on the same piece right away. 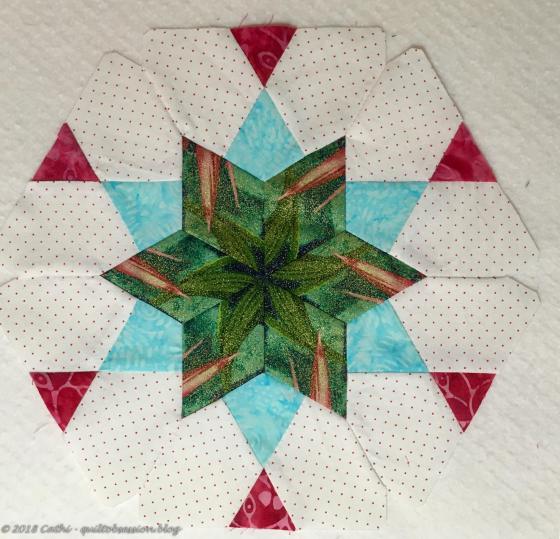 Given that I decided I wasn’t content with the look of the fabrics I first picked out for the Not So Silent Garden only after I’d finished the second block using those fabrics, I decided I’d best sew a second one with the new fabric choices just to be sure. Or was it because I was just having too much fun with these wonderfully cheerful and bright fabrics on a cold, wintery weekend? I’m not telling!

Pressed it. Graded the seams. And I love it. It’s brighter, and more cheerful. There’s an added benefit to this change of fabrics I hadn’t thought about – using batiks for the triangles and kites makes for a lot less bulk and the block is easier to press flat.

I will have a lot of printing to do of the kites, triangles and irregular hexagons for the Not So Silent Garden, but if I do a few pieces every evening or so, I’ll quickly have what I need printed.

On Wednesday, April 11th I heard a wonderful sound – a robin! I immediately went to look out and sure enough, there was a robin out on the roof garden. Of course I had to take a photo and of course you can’t really tell it’s a robin so we added the arrow and commentary, but that is the first robin of the so-called spring out  on the lawn.

Why so-called spring? Because of this! Saturday morning we woke up to the sound of ice pellets hitting the window. Ice pellets on April 14th? Is this winter ever going to end??

Around 1:00 p.m. on Saturday I took this photo – while that may look like snow, it’s not. It was ice pellets that had accumulated. A while later on Saturday afternoon we had a bit of snow, but not much. 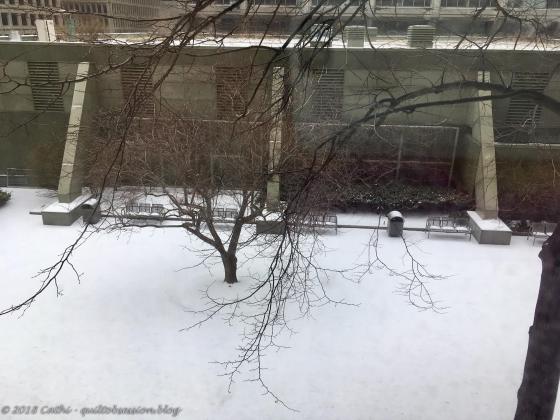 Sunday we heard more of the ice pellets. And I took this shot at about the same time as I had on Saturday – now we had ice pellets on top of the dusting of snow on top of ice pellets. And all I could think about was that poor robin – it must have figured it had gotten its months mixed up. And we’ve not heard it since Friday. Perhaps it decided to head south again.

Then yesterday it was snowing again. Although it’s not really obvious in this picture, it was a very fine snow that was falling. On April 18th! At this rate, I’m beginning to wonder if this is just going to be one long winter that never ends until we get one weekend of summer-like temperatures before it’s fall again. 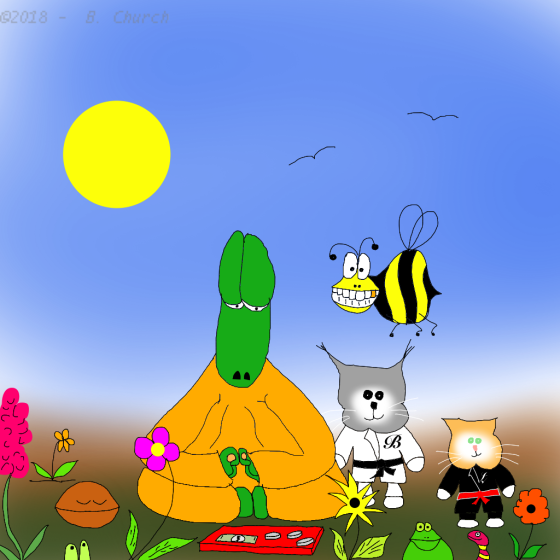 Jake was intently watching that robin on April 11th. Since the weekend, he’s not been very interested in looking out there and who can blame him!

Monday was Baxter’s 7th birthday! I can’t believe he’s already 7 – it really feels like almost yesterday we brought home that tiny, tiny kitten. He got a wonderful new toy and lots of treats and after all that, he had to have a rest in one of his favourite spots – his carrier.

18 thoughts on “Change is Coming to the Not So Silent Garden! Again!!”