I seem to be in a routine right now of jumping from one project to another on a nightly basis. 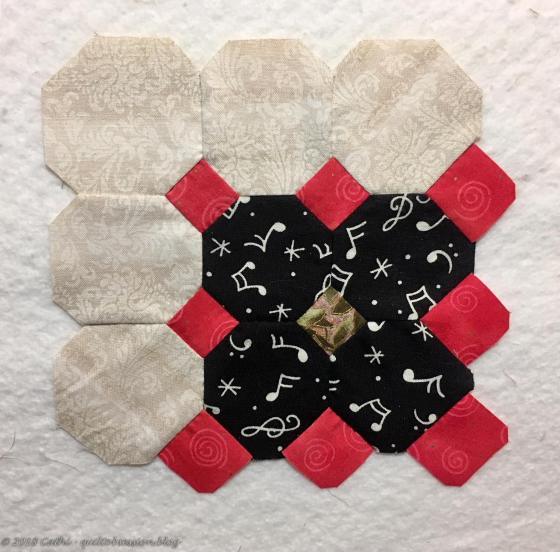 One thing I’ve decided cannot go on the back burner for any length of time is the Harpsichord Quilt – my version of Lucy Boston’s Keyboard Patchwork. I’ve got a little over 115 blocks left to make and, now that I’ve found a quicker way to sew them, it’s possible I could finish them this year. So on the weekend, I made this little red block.

I’m definitely grading the seams on these as I go as I’ve learned the hard way when dealing with loads and loads of little pieces in little blocks left to the end that it becomes a rather daunting prospect. Doing it when I finish the block takes only a minute and then it’s done!

Then it was off to finish another B&B Silent Garden block (B&B is much faster to write than brown and blue). I’m still so amazed at how much I like these blocks!

I’m not grading these as I go – or at least not yet.  I love how perfectly they press. 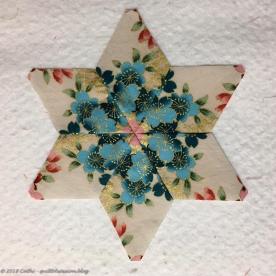 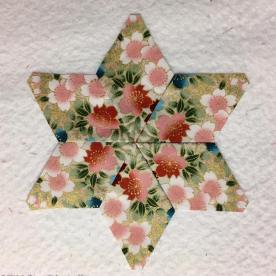 Then I had to make a few more stars for the Kona Bay Silent Garden project. I had one set of fussy cutting//printing that didn’t quite result in perfect kaleidoscope stars but the overall effect is still there. That Kona Bay fabric is just too special not to use every piece, whether they’re perfect or not!

The current plan is to try – operative word being try – to make two Harpsichord blocks every week while I’m working on the Silent Garden tops. I’ve decided against starting to turn the wild floral kaleidoscope stars into another Silent Garden top until I get at least one of the three that are currently started finished.

I’m trying to be very good about wearing the splints on my hands/wrists at night but at least 50% of the time I wake up to discover I’ve taken them off in my sleep. This morning I had to laugh when I woke up and saw that once again I’d taken them off and this time had placed them ever so neatly on top of the duvet.

Jake hasn’t wanted to pose for photos lately – so I think I was lucky to get this.

When I looked at this photo, I remembered that Baxter had started to yawn right after I took it. His mouth has just started to open when I took this.