Lots has been going on – including a computer that decided it wasn’t sure how well it wanted to work for a few days. Lots of nail-biting going on over that, I can tell you, as I couldn’t begin to think about dealing with all that might have meant. Although I do think it’s a wake-up call and I need to start thinking about a new one in the next six months to a year.

Then I got completely engrossed watching this video. But not because of what she was piecing. Oh, no.

It’s watching how quickly she pieces that had/has me mesmerized. And after watching it for the gazillionth time, I found that I was incorporating some ideas into my own piecing. And wow – it really did make a difference. I’m using my thimble to push a bit like a rocking stitch, and getting lots of tiny little stitches in no time at all. I’m fascinated by the thread cutter ring she wears as I can definitely imagine how much time that saves.

The needle she uses to piece also has me intrigued. She gets a lot of stitches on it – more than I can manage on a #12 sharp. So I tried a #11 straw, being the smallest straw I had. It seemed enormous in comparison to the #12 sharp and I wasn’t comfortable piecing with it at all. So I’ll stick with my #12 sharps as they are the needles with which I’ve been getting lots of lovely tiny little stitches.

So, of course, I’ve been sewing lots of Silent Garden blocks – well, a few at least. And much quicker than I had been. 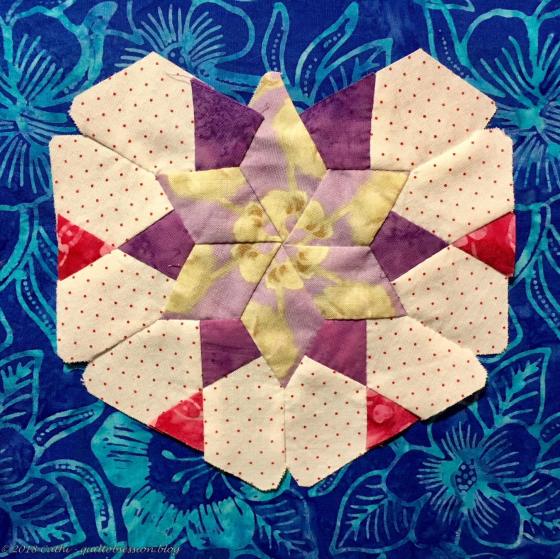 First of all, I had to do one more of the little mauve and pink ones. And this has me totally sold on the Silent Garden setting. Why? Because I was thinking that some of these little kaleidoscope stars with the pale green designs just didn’t seem all that exciting. But in this setting with the darker purple kite adding some pop? All of a sudden that little star seems to really sparkle and shine!

The back after pressing.

Then we get to what I tried to resist. Well, okay – I tried to resist for about a nanosecond would be more like it. I have a piece of a wonderful Kona Bay print that I have been holding on to, patting, gazing at, you name it, just waiting for the perfect idea. I knew it was likely going to end up in a kaleidoscope something but once the Inklingo 2″ Silent Garden collection was released, I knew that was it. So I started.

The first of the Kona Bay Silent Garden blocks. 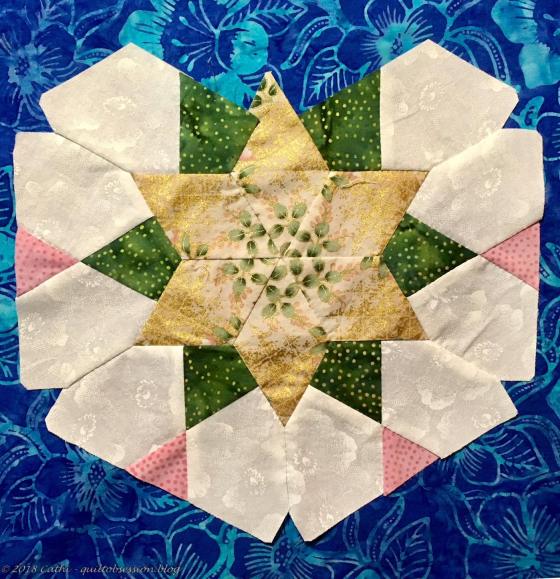 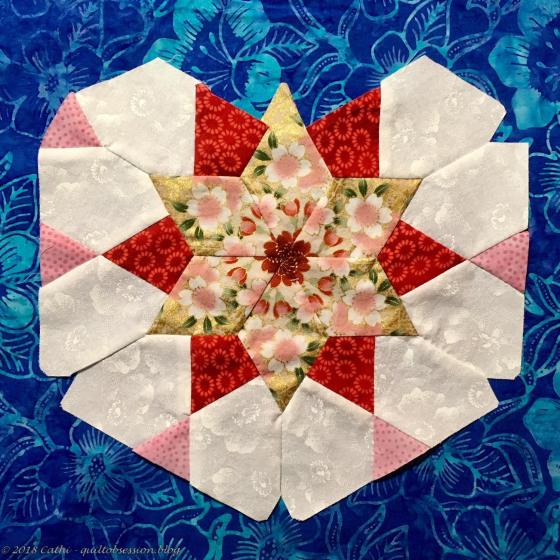 Then what I think of as the first red Kona Bay Silent Garden block. I’m  going to be using three different colours of kites with these stars – either the green in the first block, the red used in this or the teal/blue that’s in the next one. This red block has an error – but one that I didn’t even notice until I took the photograph. But no worries – it’s an error that’s oh, so easy to fix. I have one little pink triangle inserted where it doesn’t belong. A little bit of quick picking out of stitches and that will be fixed in no time.

Finally, the first of what I’m thinking of as the blue Kona Bay Silent Garden blocks. 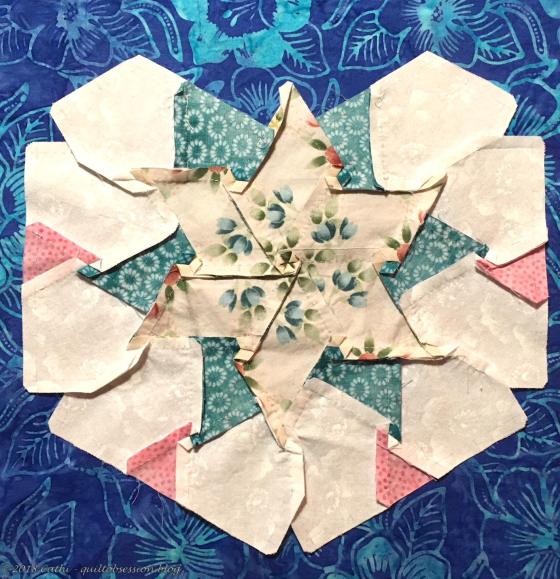 And the back of the first blue Kona Bay Silent Garden block.

The brilliance of this design of Willyne Hammerstein’s, in my opinion, is that setting just makes it SO easy to get different effects, depending on fabrics used. To see how well it works with the pale little mauve star and then with the more colourful Kona Bay stars is just fabulous. Using different colours for the kites will add a level of interest as well. And, of course, having Inklingo to print perfect templates on the back of my fabrics is the true gem that pulls it all together for me as I know when I start to piece that everything will go together perfectly.

The lobby flowers are very colourful – which we need right now! Because we’re back to the starkness of winter. After the oh, so welcome January thaw last week when we saw a little bit of a sort of green lawn and the green shrubs, that’s all now covered in a white blanket again. Jake was enjoying a bit of sun last week.

While Baxter was right at the window on the day of the January thaw, drinking in the lovely mild air. The temperature was only in the 50s but after day after day of that polar vortex cold, it felt downright tropical and we had the windows open most of the day and night. I think he was hoping to see a few squirrels and birds.