The reason for the title to this blog post is that picture and this fabric. It’s a fabric I’ve been thinking of as “the” fabric ever since I started down this path of making the Garden Gone Wild quilt. I pulled it when I initially pulled fabrics for flowers, having no idea what it was going to become but hoping I’d run across something for which it worked.  Then I saw the picture on Wanda’s blog and knew right away that was the flower for “the” fabric!

I’m still playing with possibilities, but this was the first group of fabrics that I started to work with, just to get an idea. I love that the shaggy orange coneflower has some pink in it as well – and I think I found the right pink to play.  So that’s one fabric added that won’t be subtracted. 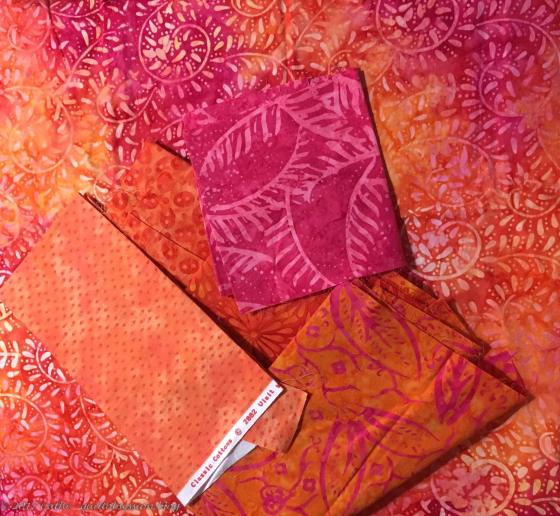 Then I added one more fabric to the mix. I’m likely to go through this – adding fabrics and then subtracting others for a few days before I settle on the final group. Once I do settle on the grouping, I’m going to print the shapes right away. That way, the fabrics I pick for the shaggy orange coneflower won’t get mistakenly used in another flower. The two photos were taken no more than 10 minutes apart, yet the light had changed just enough that the pink looks quite different.  But it’s still the right pink with “the” fabric and it’s staying!

“Orange What?” Mr. Q.O. says the ‘toon characters just couldn’t quite grasp what it was they were supposed to paint, that a shaggy orange coneflower just didn’t compute.

I can’t believe how cool it’s getting at night! All of a sudden, it feels as though fall is lurking right around the corner and the day when we’ll have to put heat on may not be too far off.  But school goes back in the day after Labour Day so, as it’s almost always unbelievably hot and humid that first week of school, maybe we’ve got a lovely last gasp of summer yet to come. 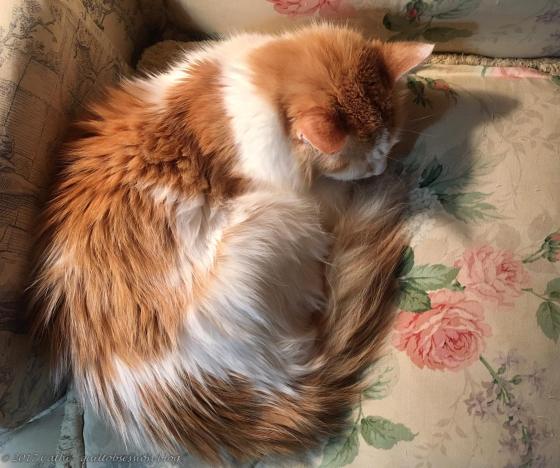 Shortly after dinner last night, this was Jake at one end of the couch.

And at the other end? Baxter, of course!

16 thoughts on “The Flower I’ve Been Waiting For!”