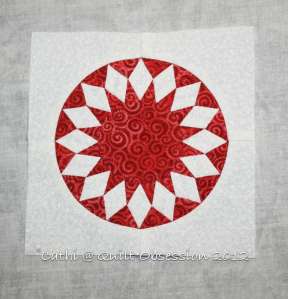 I didn’t quite make my goal of having two of the sunflower centres for the Feathered Stars done, but at least one is complete and the second is mostly done. Part of the reason I didn’t get the second one completed is that a fair amount of time was spent cutting the shapes for the spring Winding Ways. There’s still a lot of cutting left to do, but I hope to have that finished by the time the weekend is over. I think I may have to get a larger box for that project.

A couple of times I’ve left the grading of seams until the entire Feathered Star block was done. It is so much easier to do it in increments, so now I grade the seams of the centre sunflower right away. 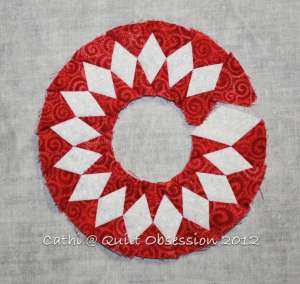 The ring of diamonds and triangles that go around the centre of the second sunflower are done. Once that ring is made, the rest of the piecing of a sunflower block takes no time. I may get the second one finished tonight and the third started. 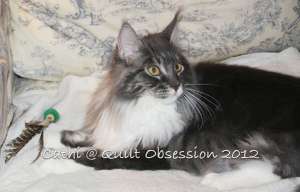 One of Baxter’s Christmas presents was this feather toy. I think it’s a toss-up between this and Cappy as to which toy he prefers sometimes. Last night he was playing with it, managed to get it under the couch too far for him to reach, then meowed pathetically for help retrieving it.

5 thoughts on “One Centre Done, Another Begun”