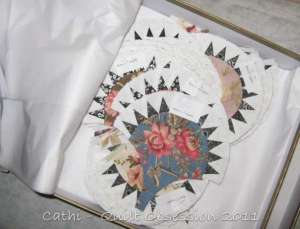 Out came the box in which the clamshell pickles, aka Pickled Ladies, were stored and I began putting the top together.

The first two rows are almost all joined together now. They’re going together quickly and oh, so easily. I’m hoping to get the centre done within a couple of weeks. That, of course, remains to be seen as I’m so easily distracted by other projects!

The piecing of the Twinkling Stars top is complete. The two borders were added yesterday and it was finished even before the second game of the World Series began. We couldn’t figure out where to photograph it last night, but will be getting a good photo of it today.

Baxter had another very busy day on the windowsill, as we had a fairly windy day again and there were leaves flying by the window. Last evening he was posing in my computer chair – or was he perhaps plotting and waiting for his chance to get on the keyboard?

12 thoughts on “Pickled Ladies Joining Up”