There were a couple of questions last week about how I pieced a Seven Sisters block so, rather than try to explain it in words, I thought I’d do this mini tutorial.  Lester is hoping this is relaxing and easy to follow.

The first step is to make the seven 6-pointed stars that will be in the block.  For each block, I need 18 white diamonds, 6 half elongated hexagons and 42 blue diamonds for the seven stars. 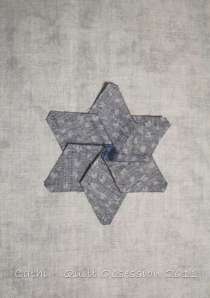 My next step is to surround one star, which will be the centre star in the block, with white diamonds.

Because I hand piece, the inset seams are something I look for as it offers the opportunity to continuously stitch around the star.  To add the six white diamonds around the blue star, I used one length of thread. 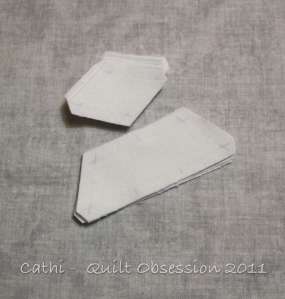 In this photo you can see, on the white diamonds and half elongated hexagons, that each has the stitching line and crosshairs at the end of each seam.  The lines are printed on my blue fabrics as well, but they don’t photograph as well.  Because of the perfect  stitching lines and crosshairs one gets when printing templates on to the fabric using Inklingo, it makes stitching a block like this a breeze.  I simply match up my crosshairs, pin and stitch.

My next step is to join the six remaining stars with white diamonds so that they’re ready to stitch to the centre star.

Then I pin the first of the strip of six stars to one of the white diamonds surrounding the centre star and start to stitch.  Again, lots and lots of continuous stitching.

A couple of threads are all it takes and the centre star is completely surrounded. 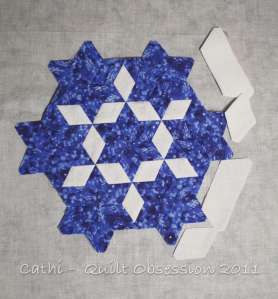 All that’s left to do now is add the six remaining white diamonds and six half elongated hexagons around the outside edge and the block will be done.  Once again, lots and lots of continuous stitching.

The block is finished.  While I didn’t really keep track of the time it took to make the block, I think that it took somewhere around 3 hours in total from making the seven stars to adding the final white diamonds around the outside of the block.

A quick press and it’s ready to be added to the stack of the blue and white Seven Sisters blocks that I am making.

Smudge hopes you found this as relaxing as he did.  He had to go curl up with some softies and have a nap!   He had lost a pound again when we went to the vet.  So we’re continuing the syringe feeding for now and have gone back to the vet-suggested foods.  Sunday night he finally started to eat hard food again for the first time in two months.   We were really encouraged to see that.

16 thoughts on “Piecing a Seven Sisters block — lots of photos”