One of the projects I started over the past year is Nocturne from Millefiori Quilts 3. I had fun going through fabrics looking for just the right one because, of course, I was going to be using the Inklingo Nocturne collection to do some fussy-cutting/printing.

This was the fabric I eventually chose.

Two project boxes are being used for this – one with just the pieces of the black background fabric. 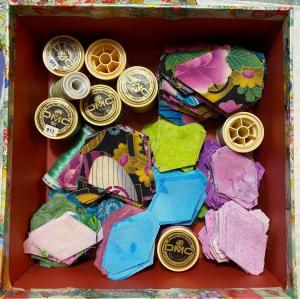 And one with everything else plus the various threads I’m using for the project.

The blocks are quick to stitch. I surrounded four of them with the black background hexagons as I wanted to see how that was going to look but, as every block isn’t completely surrounded by those black hexagons, I won’t be adding anything but the little diamonds around the rest of them. That way I’ll be able to move them around as much as I want when figuring out where I want each block in the top.

The back of one of the blocks after grading the seams. 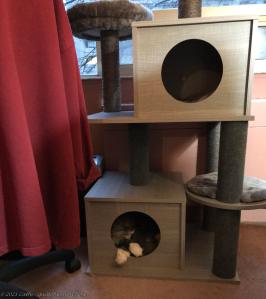 Baxter got a new kitty tree last year. It took him no time at all to decide he liked it. He often is curled up in the lower level room.