After I finished the marigold block, I decided to try to prep at least two blocks so I could just pick them up and start sewing.

As of right now, I have the pieces printed and ready to sew for the wisteria block. 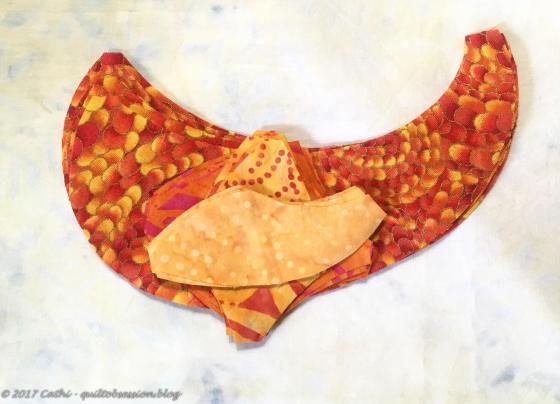 And the chrysanthemum block.

Now I’m finding that I have a problem! I have so many fabric combinations I’m playing with right now for more flowers that I think I could very easily make another nine or ten on top of these two!

This quilt is either going to end up much larger than I envisioned if I set them on point, which I’m leaning towards as I think I’ve found the perfect setting fabric, or I’m going to have to come up with a sashing that will work. As of now, there are seven blocks completed although that number may be just six if I keep the first pink one I made set aside for the Peony Quilt. If I limit it to 12 blocks, meaning I can only print the shapes for four more on top of these two, it’s going to be very hard to decide what to leave out! If I make as many as I want to make, it’s going to be enormous, no matter how I set them. These are huge blocks – well, to me, they’re huge – finishing at 12″. It’s almost impossible for me to contemplate not making all the ones I want to make because every seam of these blocks is lovely curved piecing and I just love the look of the ribbon flower blocks!

Some decisions are going to be made this weekend because I plan to pick out the fabric combinations for at least three more, including their background fabrics, on top of the hyacinth and chrysanthemum ones and get them all printed and ready to sew. My printer is going to be humming this weekend for sure!

The final decision to be made this weekend after choosing those fabric combinations will be which of the wisteria and chrysanthemum blocks to start putting together as it will definitely be one of those two that I sew next. Jake had the toys yesterday afternoon.

While Baxter had them the evening before. He seems to use that huge toy as a pillow more than he plays with it, while Jake will wrestle with it.