It’s finished. Finally finished. The number of needles that were bent, dulled and even snapped in two in the making of it are too numerous to mention! I don’t think I’ve ever gone through so many needles making just one block. 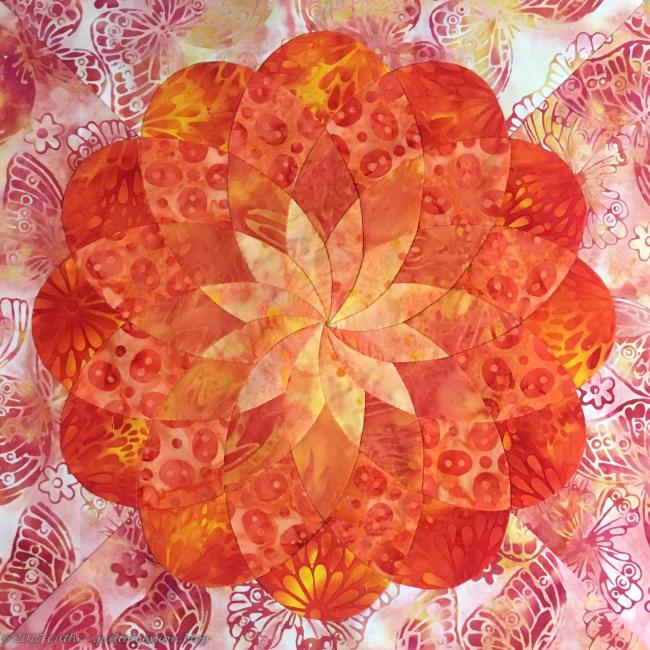 The first of the orange flowers for the Ribbons of Flowers Quilt is a marigold. All batiks, even the frame.

The back – and it was definitely not the best I’ve done pressing these blocks. I will go over it again after I grade the seams but I was just so glad to have the block finally finished that I decided to leave the grading for another day.

A commenter suggested I try the Liuxin Newman needles. I have some of her needles, so decided to indeed try one. While I don’t think the small Liuxin Newman needle is anywhere near as fine as a Roxanne #12 sharp, it did not seem to dull and definitely didn’t bend or snap while I completed sewing this block. So if I use either of the first two batiks in the marigold or come across another very difficult to needle batik in another block, I will use the Liuxin Newman needles again. But otherwise, I’m sticking with the Roxanne #12 sharps. I prefer how they feel in my hands and that they’re finer and usually glide through fabrics with no problem. I just happened to run into two batiks in this block that were particularly difficult to needle.

Next up? I’m undecided. I know I want to make two more orange flowers, two more pink ones, one more purple and two more blue ones. So I may take a break from orange and start the last of the purple ones or maybe a blue one. I’ll decide that later today. I’m saving the pink for the end – I think. But who knows – I may give in to my natural inclination to want to work with pink and start another one of the pink flowers – stay tuned! I will definitely decide today and get the printing of the pieces I need for the next flower done.

“Victory Lap (please be patient – this too may take a while)”

Jake was enjoying some time on the windowsill yesterday. He will spend hours watching birds and people out on the roof garden.

While Baxter seems to usually prefer the toy basket during the day while he will spend hours at night, after it’s dark, watching whatever it is he can see out on the roof garden.

20 thoughts on “The Marigold Ribbon Flower”