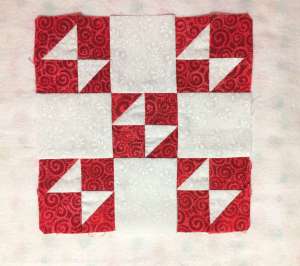 And I mean very slow progress! Although I had all the little white and red triangle units done and the four-patch units completed, I could only manage to sew  one of these 9-patch blocks last night.

Why so slow? Because I managed to turn one of the four-patch units the wrong way and, of course, didn’t realize it until the block was finished and I was about to press it. Thankfully, it was one of the four corners and not the centre of the 9-patch block. So some ripping out of stitches and then making sure I had it turned the correct way. I’m sure I was so lost daydreaming about the Inklingo Ribbon Flower collection to come and what fabrics I want to use, that I just wasn’t paying enough attention. At least that’s what I’m blaming it on! And after today, when Linda showed another Rainbow Flower block on Facebook that she had made using shapes she had fussy cut/printed on her fabric, I know that daydreaming is only going to get worse and worse until the collection is released!

The back, after pressing. I am going to grade all the seams, so the red won’t shadow through to the front when I’m done.

After that, I decided to finish off that partially finished Harpsichord Quilt block I had found, as I knew there was no chance I’d make that kind of error with it. 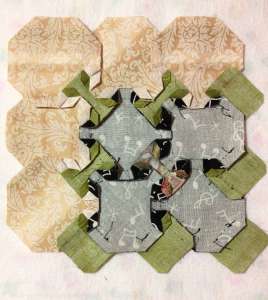 The back of it, after pressing. When I pressed it, I wondered if I’d graded the seams on any of the Harpsichord Blocks I’ve made. Sure enough – I haven’t.  So now I know that before I make one more of these, I’m going to spend some time grading the seams of the blocks. I even put a note in the project box on top, to remind me. Those are tiny pieces with .75″ seams, so a lot of seams involved that will just add bulk to the quilt. If I do the grading before I go any further, it will be a far less daunting task than it would be if I left it all to the end. 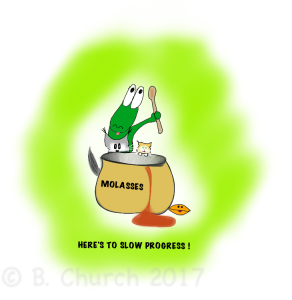 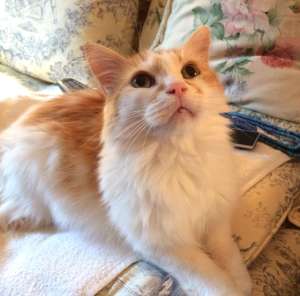 Jake had taken over remote control duty on the couch.

While Baxter had taken over Mr. Q.O.’s desk chair.