Wednesday night I was so happy as I’d finished sewing the last group of triangles into arcs for the final six black and white New York Beauty blocks and could see the end coming of working with just black and white. Or so I thought.

All that was left was adding the corners and arcs to each of those arcs of triangles. Or so I thought.

The needle dome wasn’t likely to need to be loaded with 10 needles threaded with black thread ever again. Or so I thought.

Something was nagging at me yesterday morning about the numbers of New York Beauty blocks I needed. And, sure enough, I need four more blocks.

So the black and white fabrics were cut to size, ironed to freezer paper, the New York Beauty 3 Inklingo collection PDF was opened and the printer got turned on.

And I printed more of the big black arcs.

And more of the white tris needed. Black tris were printed as well, but the picture was blurry and I didn’t realize it until after I’d got them all cut out – I think I actually took the picture as the fabric was still coming out of the printer.

And I printed more corners.

So now it’s going to more black and white sewing. I know that I have to stick with this until all the black and white blocks are finished because if I put down the black and white sewing, the chances are it could sit for quite a while. And that’s not a good idea as the Pickled Ladies project has sat far too long as it is! The only saving grace at this point is that sewing the New York Beauty blocks is lots of continuous stitching and curved piecing. By this time next week I hope I’m done with this part and can then start looking at the Stormy Seas and Peony Quilt projects and get those projects going. I will still have to add the borders to the Pickled Ladies top, which may get done as early as next weekend. 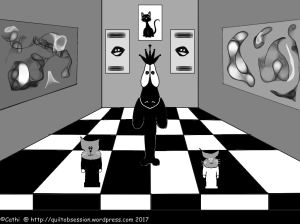 “Study in Black and White”

Jake seems to have taken over the kitty tree in the afternoons.

Baxter’s content – he finds other spots. One of his favourites is his kitty carrier.