Odd title, isn’t it? That’s what Mr. Q.O. named the quilt that was finished late last week and delivered on Friday afternoon to the mum-to-be. Now I can write about and show it. I couldn’t before as I was a bit concerned that her co-workers might see it and spill the beans! One of her co-workers was my spy – she found out that the baby was a girl and what colours the nursery was being painted. 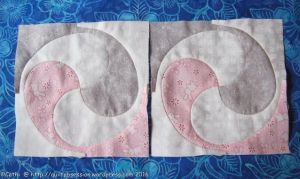 It started with 6″ blocks like these and those blocks grew in number until I had 56 of them. I had adventures when trying to find the mirror image setting on my printer as I wanted to print the template on my fabrics of half the shapes as mirror images. I wanted mirror image shapes so the quilt would look like this:

This is Baby Bubbles, fresh from the washer and dryer and before being given to the mum-to-be on Friday. I am thrilled with how it turned out! It finished at approximately 50″ x 56″. Pieced by hand and by machine (but only when adding the borders), and machine quilted.

There were challenges with the quilting – more on that in a minute – but I found that painters’ tape was the perfect guide. No lines needed to be drawn at all and no residue to worry about being left on the quilt.

One of the things about this quilt that I am ridiculously excited about are the perfect mitred borders. A good friend took all the mystery out of mitred borders for me and now I will never use plain borders again – not when mitred borders are so easy and look so great! It wasn’t until I looked at that picture that I saw that it seemed to show the pink of the backing shadowing through. But I knew it wasn’t as I had been a bit concerned about that and had a very good look at it – odd what the camera picked up.

The backing? Well, a pink flannel of course. The label is a temporary label as the little girl’s name had not yet been chosen. I will replace it with a nicer label once that’s known. 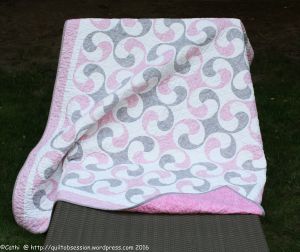 We took a lot of photos of it out on the roof garden Friday morning – and this is one of my favourites, draped over one of the lounge chairs.

The challenges with quilting? There were a couple. I have an older Pfaff that has a rather boxy style to it, rather than the more sloped front that the newer ones have. And the drag that was created by that boxy shape was challenging. Until, that is, Mr. Q.O. remembered a huge craft table that was upstairs in the locker. So down that came and we lowered the height of the table so that the quilt wasn’t dragging anywhere near as much.

Then it developed tension problems. I tried every trick I know and it seemed to be doing all right, but it didn’t sound quite right either. So it’s off to the machine repair shop this morning. I had finished the quilting (or so I thought) and got the binding on. Then I saw, when I started looking really closely at the back, that there were  quite a number of spots where the stitches hadn’t formed properly. So the next day I was painstakingly taking them out and actually ended up re-doing those lines of quilting with my Featherweight. It worked perfectly – and no drag on the Featherweight at all because of that lovely glossy black finish! But oh, there were points that afternoon/evening/night that I thought I’d never get it finished as I kept finding other lines of stitching that had issues. But finally it was all done and I love it!

The bonuses from making this quilt are too numerous to mention. I got to make a quilt that I think is one of the prettiest I’ve made and all that lovely curved piecing was a delight. I learned how to easily do mitred borders. We brought that wonderful craft table down and it will work for me as a cutting table – oh, it’s going to be lovely to have a large cutting surface like that – and a great place on which to have my Pfaff at just the right height! And my Featherweight can sit in the Featherweight card table and I have it ready for use any time I want. I also learned, just from playing with a practice sandwich, that I may well be able to do some free motion quilting – on the Featherweight.

I could not have made Baby Bubbles were it not for Inklingo – the 6″ Yin Yang collection, to be precise. I noticed that block a few years ago in a quilt magazine and tried to make a block using freezer paper templates. That was an epic fail. I had an absolute volcano in the centre, no matter how much pressing I did. Then an Inklingo collection for Yin Yang was available and I’ve made this block many times. The ones I did before were always all very scrappy, though. I love the result I got using just three fabrics. And I’m sure I’ll make another quilt using this collection – as those blocks are absolutely addictive to make! 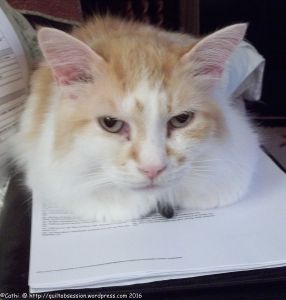 Jake loves to sit on Mr. Q.O.’s puzzle and pen.

Baxter – I love this photo as it really shows his amazingly long whiskers.

And now that that quilt is done, I will be blogging somewhat more frequently. I had been spending almost all my time working on it so really had nothing I could show!

Leave a Reply to Archie The Wonder Dog Cancel reply