What have I been doing during the unexpected month-long absence from my blog? Lots of little things.

First some black and white 6-point stars made with .50″ diamonds. I had printed loads and loads of black and white diamonds years ago and, while I had made a few, hadn’t really settled on how I’d set them. Well, now I have and it will involve some bright – colour to be decided – .50″ and 1″ hexagons. I think it will be a fun quilt and for now I’m just enjoying making the little 6-point stars. They’re like quilters’ candy to me – I can’t make just one, have to make multiples!

Then I made a few more of the fussy cut/printed 3″ LeMoyne Stars. I have no idea how I’ll set these, but will figure it out when I finish them. Whatever the setting, this will be a small quilt top.

Finally, some pink. Of course some pink. I needed some pink! This time 10-point stars made with the diamonds from the Passacaglia Inklingo collection. And half stars. I have an idea that I want to play with that will involve loads of the half stars. And some fussy cut/printed connecting pieces.

The last of the grey and white Feathered Star blocks has been finished for a while. They’re not joined together yet – but they will be soon. I think I just got to the point I couldn’t work with grey any longer! Or big blocks. I needed my miniatures and anything but grey.

So that’s what I’ve been up to. I’ve not been visiting many blogs during the past month, but hope to get back into things this week.

Baxter has been spending loads of time in the kitty tree. 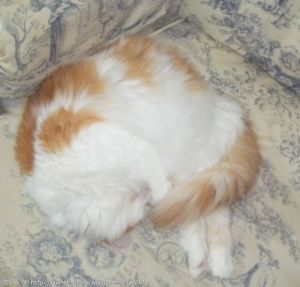 As has Jake, but we don’t seem to have managed to get pictures of him there. However, he loves to curl up in the evenings on the couch and this time we got an almost headless cat pose. You can just see the tip of an ear.