Well, I didn’t really mean to vanish for two weeks. So what have I been doing?

Well, for starters, my printer’s been very busy printing lots and … 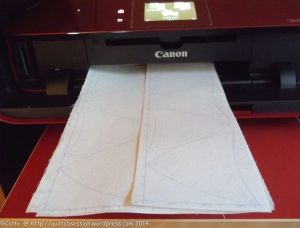 … and lots of shapes.

First for six little 6″ Winding Ways blocks like this one. I love sewing these – the centres turn out perfectly, thanks to the stitching sequence taught in the Inklingo Winding Ways Design Book.

The centre of the block is nice and flat with no bump at all in the middle following that stitching sequence. And, of course, the perfect stitching lines and matching points make piecing the block itself a dream. Doesn’t hurt that every seam involves my favourite – curved piecing. This is making me want to get the Winding Ways project I had started with 4.5″ Winding Ways blocks using hand-dyed fabrics back out, but not quite yet. 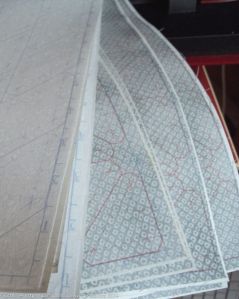 Then the printer was even busier printing lots … 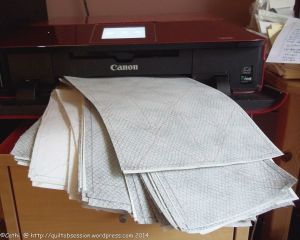 Five of the Winding Ways blocks were meant to be the centres of the Feathered Stars, while the sixth one will be the label for the bed runner when it’s done.

The first of the five Feathered Star blocks is done. There’s loads and loads of continuous stitching to be had with this block, but I’d forgotten just how many pieces there are in each one. It actually took me almost a week to finish sewing one block. But I only need four more for the bed runner, so am hopeful I’ll have it done by mid-June.

The back of the block. Seams mostly graded – I realized when I looked at this picture that I had missed grading a few, which I’ll do before I start the next block.

I finally decided to dress up our white duvet cover by adding some bed runners. And I plan to make at least four. I don’t know why I decided on this grey/taupe and white one for the Feathered Star, but I did. And it will be quite elegant, I think, when it’s all done.

The next one? Oh, the next one will be much more me. It will involve some fussy cutting and lots and lots and lots of little pieces in pinks and greens and creams. And it’s the carrot I’m holding out to myself – as soon as I finish the Feathered Star one, I will be starting it. I’ve already got an idea which fabrics I’ll use for it.

So that’s what I’ve been up to. Lots of printing and sewing and hopefully now that I’ve got into a rhythm of stitching these Feathered Star blocks, the next four will go faster than the first. Because I’m absolutely dying to start the next one!

Jake has been very busy watching out the window lately. The trees have finally got their leaves and there are loads of birds to be seen. And he spends many hours either in the kitty tree or on the windowsill watching those birds. And then he’s tuckered out and has to have a nap away from the window.

Baxter isn’t as interested in the birds so far this year. But he does love to snooze atop the couch.

8 thoughts on “A New Project”