When I start a Patchwork of the Crosses block, particularly if I’ve done some fussy cutting/printing and the orientation of the shapes is important, I like to lay the pieces out on a page of my stitching book. That way I can work on the block over a couple of days and not worry about remembering the orientation. My stitching book has sheets of batting which hold the fabric quite nicely. There are many ways of piecing one of these blocks together. What follows is one I’ve found that seems to make the blocks really quick to piece for me.

There are great tips on piecing these blocks in the book Lucy Boston Patchwork of the Crosses and, even better than that, there are some of the best photos of the blocks in the original quilt imaginable. Including a centrefold photo of the entire quilt that you absolutely don’t want to miss. There are tips on fabric choices, fussy cutting/printing, pressing and finishing the blocks and, for those who want them, shapes to trace for templates. Although I can’t fathom tracing all the templates this would require when you can so easily print them directly on fabric. 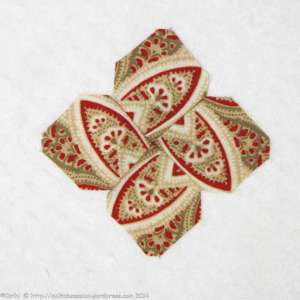 The first thing I do is sew the centre four hexagons together.

Then it’s time to sew the wings together – I really can’t think of a better term for them – that are made up of the outer pairs, which are in this case the green ones, as well as the single hexagon from the middle round.

Just insert the needle through each pair of fabrics right at the crosshairs. 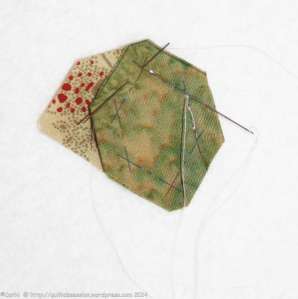 A quick backstitch, and then sew the second little seam to the end, make a knot and break off the thread. 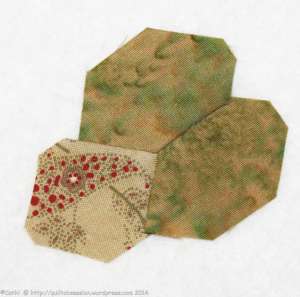 At this point, I lay everything out again on my stitching book page. It makes it easy to pick up the segments I need and keeps everything handy. And now there’s a fair bit of continuous stitching to be had.

This is what it looks like at this point. 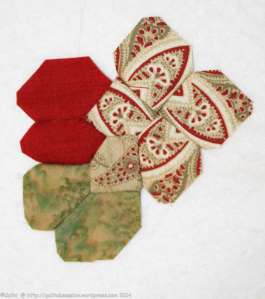 Next I’m going to pick up one of the pairs of red hexagons. They get added to the sides of one centre hexagon, the single hexagon and one side of a green hexagon, in that order and all without having to break the thread until those little seams are all finished. 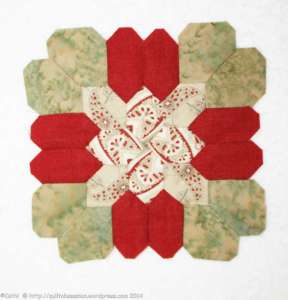 At the end, you have a wonderful Patchwork of the Crosses block. And looking back at these photos, I think I may replace them with a block done with slightly larger hexagons. I chose the .50″ ones to use to make this block.  They’re fabulously tiny and fun to sew but perhaps a slightly larger hexagon would have been a better choice for a piecing tutorial. 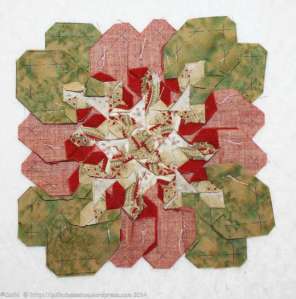 After pressing, but before grading the seams. When pressed like this, even a tiny block made with the .50″ hexagons will sit lovely and flat.

Jake was enjoying some time on the kitty tree yesterday. I’m fascinated by his eyes – they are the most interesting colour.

Baxter was reclining on the floor, but keeping his eye on Jake.