I needed a small diversion, I think, as I couldn’t resist starting a new project.

First I went about choosing fabrics. Not all the fabrics in this grouping are going to make the final cut, but I don’t think any more will get added. 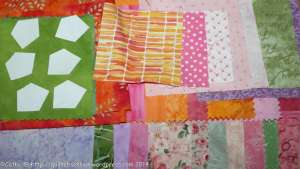 Other than some from this second group. See the little white freezer paper pentagons? More about them in a second.

What started me down this path? Last week I was wandering about some blogs and was immediately captivated by the mandala shown on the Cabbage Quilts blog. And I knew I had to make a version of it.

I printed a couple of sheets of diamonds on fabric. I thought I was going to use one of the hexagons shown in the first picture, but I decided against it so printed a few hexagons too. And then the dark ages work began.

First I made a couple of dozen of the pentagon template on freezer paper. Cut them out. Those are the funny little white pentagons in that second picture.  Then it was time to choose the fabrics for the pentagons, iron the freezer paper templates to the fabric, cut that out, adding the quarter-inch seam allowance when cutting. Then traced around each pentagon so I’d have my stitching lines.

You think reading that last paragraph sounds like a lot of work? The whole time I was going through that process – and I’ve only done enough of the pentagons for the first couple of rounds of this – I couldn’t believe I had decided to do this.

It made me really marvel at the fact I went through that process and traced every tiny piece that went into my Quilted Diamonds quilt. While I’m committed to making at least a few of these mandala blocks as I have what will be, I think, a good idea for using them, I realize just how much I don’t want to do much of this tracing of templates. 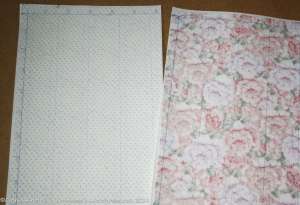 The time to prepare to and print the two sheets of diamonds seen in this photograph and cut the diamonds out? Maybe 10 minutes. Maybe.

The time to go through the whole process of prepping the templates, ironing them on fabric, cutting the fabric out, tracing the templates on the fabrics seen in this photo?  At least an hour, probably closer to an hour and a half.

So clearly I’m committed to making this, or else I would not have done that work. But sheesh – no wonder my friend calls this the dark ages of quilting! One thing’s for sure – even though I used a very fine white pencil to trace my templates, that stitching line is nowhere near as fine as the ones I’m used to. I’m definitely spoiled.

This mandala madness is just a slight detour from stitching the butterfly kaleidoscope stars together. I think once I get the first mandala done it might be – well, okay – enough tracing for me for a few weeks and the butterfly stars will start to grow quickly.

And this is how far I got with the stitching of my first mandala last night. And I am going to have to prep more pentagons very, very soon. All I can say is it had to be a really fabulous design to get me to do this kind of prep work again.

Jake was in possession of the upper tier of the kitty tree when Baxter decided it was time for him to vacate. Baxter jumped up and surprised Jake and then was “encouraging” him to leave. Jake has been known to “encourage” Baxter to vacate the top tier at times too, but this was the first time we’ve seen the two of them up there at the same time.