When I finished the red and white quilt and the 30 little sunflower blocks in it, I thought I’d never make another sunflower again. Certainly didn’t think I’d make another 6″ one. Maybe a 12″ one would be okay.

But an idea kept flitting in and out of my mind to make a series of batik sunflowers. I tried to ignore the idea. Mentioned it to two friends, also known as the enablers. The enablers encouraged me to go for it. I still tried to ignore the idea. But on Friday, the idea took over. Had my pieces printed on fabric for the first [edited to add] 6-inch sunflower in just a minute or two. Cut them out and this was the first one done. Loads of continuous stitching opportunities and curved piecing. Two of my favourite things.

But I couldn’t stop there. Not a chance. Printed for another one on Saturday and finished it last night. 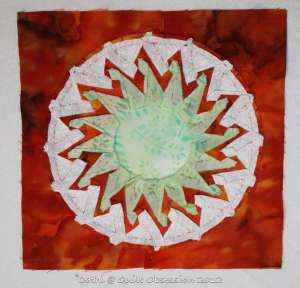 I am grading the seams as I go and then pressing them. This is going to be a very long-term project. When I have some batiks out, I’ll cut the sizes I need to print and then print them. So far, there are six waiting to be stitched. And they won’t all be orange. I’m going to have blue sunflowers and purple sunflowers and who knows what other colour sunflowers. Some will be one batik and white. Others will be a couple of batiks and white. Some may be all batik. One thing’s for sure – using batiks in the sunflowers makes them so easy to press. Much easier than the red and white ones were.

What I didn’t do on the weekend was start working on the Spool blocks by machine. An uncomfortable chair, a neuralgia attack and the lure of the batik sunflowers all worked against me on that front. But the pieces are all stacked by the sewing machine. Who knows? Perhaps this afternoon I’ll try making one by machine. That is, of course, if the batik sunflowers don’t entice me away again.

Baxter’s home from the Kitty Olympics with a gold medal in swimming and sleeping. Swimming because he does love to get wet and stick his head in the water.

Sleeping? Well, this photo was taken after he’d just woken up from sleeping on the top perch of his kitty tree for a few hours.