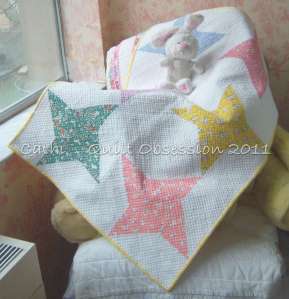 The baby quilt which I named Snuggly Stars, thanks to a suggestion from Karen Dianne, was finished Friday night.  After cross-hatch quilting the two stitching books, I decided I’d cross-hatch quilt the baby quilt as well.   I started quilting it around noon on Friday and by the time the evening was over, I had finished the quilting, put the binding on and tacked it down. All that was left was to add the label, which I did Saturday morning before I left to go to the Creativ Festival.  The little quilt finished at 24 x 36 and was totally machine pieced and quilted.

Sunday morning we threw it in the wash, which was a bit of an adventure.  Mr. Q.O. took it up to the laundry room to put it in to wash and, when I went up to transfer it to the dryer, the machine had seemingly malfunctioned.  Rather than draining the soap suds, it seemed to be making more and more.  We think someone had put detergent in the machine previously and then not used it so that, when we used it, it had much more than recommended amount of detergent.  When it finished the final spin, I couldn’t even see the little quilt for all the soap suds.  I was holding my breath when I opened the door.  As soon as I did, there was an avalanche of suds on the floor.  I finally fished out the little quilt and put it in another washing machine with no soap to let it run through an entire cycle with just water as I figured that was the only way to get all the soap out of it.

We made a decision on Friday that, as we don’t want to leave Smudge alone for too long,  Mr. Q.O. would stay home on Saturday while I went to the Creativ Festival on Saturday and I’d stay home while he went to the baby shower on Sunday.  By the time it finished its second run through a wash and then dried, there was just enough time to put it in the gift bag before Mr. Q.O. had to leave.

Saturday the rain poured down for most of the day.  Sunday we had snow.  It didn’t stay on the ground, but there were a few times I looked out the window and couldn’t believe how heavily the snow was coming down.  Smudge decided the best thing to do was have a snooze.