Working with the batiks proved to be irresistible so shapes were printed on two of the fabrics.   I actually have the individual units for a block stitched but not yet pressed or stitched together into the block.

This little pile of pieces is all I need for the next block.

The Stormy Seas quilt will be a long-term project as I plan to make it large enough for a king-size bed  and will be using 9″ blocks.  There’s a lot of stitching ahead of me on this one, but I have no deadline so can just enjoy the making of the blocks over the next year or so.

One of the other projects that is likely to get started on sometime in the next month or so will be made with these charm packs and the one larger piece of fabric from that line.  I have  a few ideas in mind for this one. 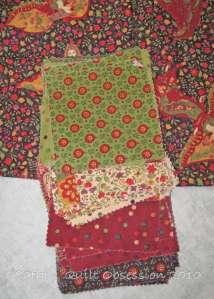 It has been amazingly mild this week.  The mornings are a bit chilly, but as the day wears on we are hitting temperatures in the 50s.  The other day, Mr. Q.O. got this photo of one of the trees at the front of our building. 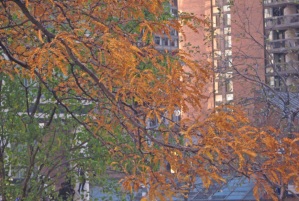 Each week new floral arrangements are placed on pedestals in the lobby.

Smudge and Lester look so sweet in this shot — but don’t be fooled.  Lester was wanting to curl up in the pink chair and was hoping Smudge would move. 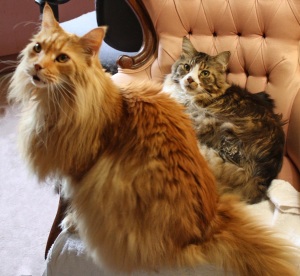 When the Rouenneries line of fabrics came out, I fell in love with it and bought some charm packs and a bit of yardage.  Initially, I printed the shapes for Drunkard’s Path units on 2 of the charm packs.  At that point, I wasn’t sure how big I wanted to make this but now, as I look at the blocks, I’ve decided to print the remaining charms and continue making these blocks.

The deciding factor was that I’d rather have a quilt in a size that’s useful than a couple of wall hangings.  So the printing of the remaining charms is on my list for this week’s preparation day, whatever day that ends up being.   It also is the first of a few charm pack projects I want to work on over the next few months.  I have a number of charm packs and have set a goal for myself of coming up with some design ideas.

I rather like this routine I seem to be falling into of setting aside one or two days a week to plan and print shapes for a variety of projects.  On that note, after I decided to use additional fabrics for the Storm at Sea blocks and figured out the layout I’ll use, I had my new cheat sheet filled out in about 5 minutes.  Now all that’s required is cutting the fabric to the appropriate size and printing.  Another on the list for this week’s preparation day or days.

On Friday evening, we decided to go over to the local deli for dinner.  As we walked down to the sidewalk, we saw flashing lights, ambulances, fire trucks and then we saw a car that was literally hanging from the side of another car at a 45-degree angle.  For a fleeting second, I thought perhaps there was filming going on in the area, which isn’t unusual, as it was such a bizarre sight.  It was difficult to believe what we were seeing was real.  After we came back from the deli, the cars had been separated and a definite crease could be seen all up the side of the one car where the other had seemingly driven up it.  It appeared as though a driver exiting from an underground parking garage and making a right turn was struck by the second car’s right front wheel on its left rear wheel and the momentum caused the second car to ride up on top of the first.   I can’t imagine how frightening that must have been for the driver of the first vehicle.  The good part to the story is that no one was injured, but I can only imagine the damage that was done to both cars.   Mr. Q.O. took a photo with his phone, but we haven’t quite figured out how to get the picture from the phone to his computer.

Neither Smudge or Lester like being in cars.  Smudge would rather curl up and have a nap with some soft friends. 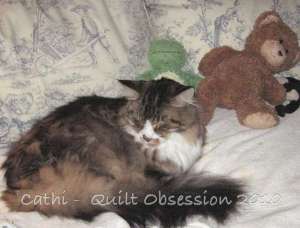 While Lester likes to watch out the window from the safety of his own home.