More about that in a second.

First up, though – another of the Tranquil Garden blocks. I think of this one as the tulip block. 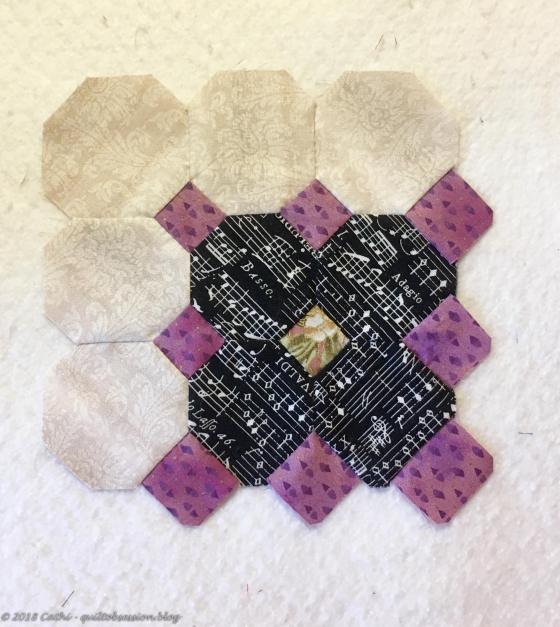 And a pretty purple Harpsichord block.

Both pressed like a dream. I’m getting close to having enough stars ready to join into a row. I can’t wait to get the first couple of rows of the Kona Bay and blue and brown Silent Garden tops done and start joining them, just to see the top beginning to come together.

Now to the intervention! I have been looking at, but not in, a project box that I’ve had sitting out for a while. I think I was almost afraid to open it. But open it I did.

And found stars. Lots and lots of the wild floral kaleidoscope stars made with 2″ diamonds. Kaleidoscope stars that would look fabulous in a Silent Garden setting.  That would possibly  make 4 different Silent Garden projects I’d have on the go, although the little mauve and pink stars have definitely taken a back seat for now.

So then I had to start playing with possibilities for backgrounds and kites with these wild floral stars. I was thinking the grey stripe for the kites might be rather fun – and then I’d use a hot pink, I think, or maybe a red for the little triangles. The background? Maybe the little polka dot in these photos.

That seemed to work with just about all the stars – I have them grouped into those that are predominantly pink, green, red and yellow/orange. 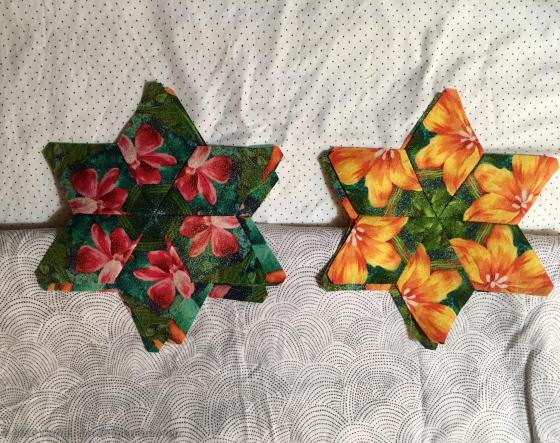 Then I decided to try it with this grey dot background – if I decide to use this, then the grey stripe for the kites doesn’t work.

I remembered the red kites I had initially used in a few of the Tranquil Garden blocks and decided to see if they worked. And they did – they went with all the groups of wild floral kaleidoscope stars but I was a bit unsure if I’d like that kite with the stars that are mostly red/orange.  But, looking at this photo, I think that might just work. The more I look at this, the more I’m leaning to using the top grey print as the background for these stars. I’m probably going to keep this last picture up on my screen for a day or two to just look at before I start even thinking about printing the background and more kites and the little triangles. I haven’t got a clue what colour I’ll use for the little triangles yet – but that’s a decision that has to wait until I have decided about the background fabric and the kites.

I’ve definitely got a Silent Garden problem! It seems I just want to make more and more tops with that setting. Of course, part of it is all the kaleidoscope stars I’ve sewn that have been sitting, just waiting for the perfect setting and that Silent Garden setting seems to be it. Those wild floral stars need to get set into a quilt – they’re just too pretty to sit. So that’s next and may even get started as soon as I decided about the background and kite fabrics.

And then? Then I’ve got a plan for another star quilt but that one will be made with stars that have eight points.  All of a sudden, I have a bazillion ideas all clamouring to be started! 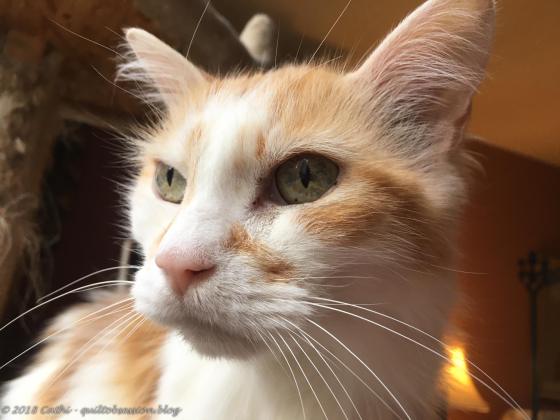 Jake was very alert the other day, staring out the window. Not at birds or squirrels but at people out on the roof garden. 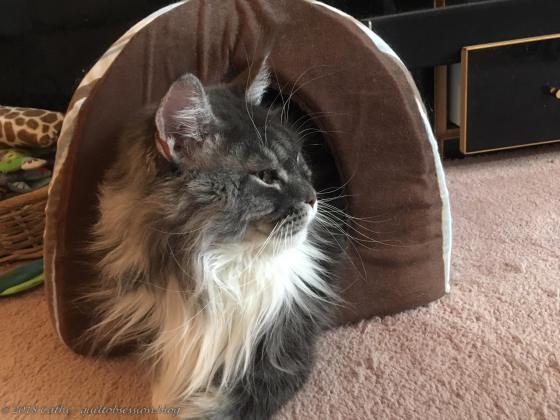 14 thoughts on “I Think I Need a Silent Garden Intervention!”