I know – I vanished again.  But I’m back and hopefully a bit more often. So what have I been doing?

Well, I’ve been listening to Jimmy Buffett’s Margaritaville and following the clues in the new Inklingo mystery quilt, the Case of The Stranger in Margaritaville (COTSIM), made with the shapes in the 6″ Key West Beauty collection.

Before Clue 1 came out, there was an introductory clue about fabric choices – pink for hibiscus, blue for a blue-eyed stranger in Margaritaville, gold for the tequila in a Margarita, green for lime and white for the salt on the rim of a Margarita glass. I initially decided to go with pink for the hibiscus because, of course, I can never have too much pink and then yellow for the sun, green for lime, blue for the blue-eyed stranger or the tropical sea and white for a white sandy beach.

These were my initial fabric choices.

Clue 1 came out and I quickly made the 60 units that called for. They were fun to  hand piece as each diamond was attached to the two triangles with continuous stitching.

Then when Clue 2 came out I decided I was going to change my fabric choices for the green, yellow and blue.

I auditioned a few fabric groupings with the completed units from Clue 1 and this was my final choice. My yellow and green are for lemons and limes, as I would have slices of lemon or lime in a glass of ice water while lounging on the white sandy beach and gazing out at the blue of the tropical sea. No Margaritas for me!

The printing and one block Clue 2 called for are now done. There’s a way of constructing this block suggested in Clue 2 that I loved as it meant more continuous stitching. 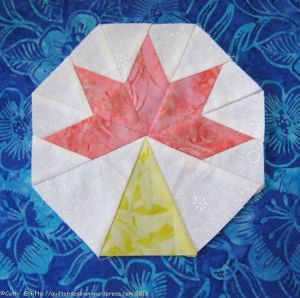 The four partial blocks that could be made if one wanted to be a bit ahead of things when Clue 3 comes out are now done as well. I love the look of this block and can just imagine how much fun it could be if I had fussy cut/print the five diamonds – and I have a fabric that’s dying to be used in a fussy cut project, so I may well be doing something with it and this block at a later date.

The shapes that have been printed so far and not yet used are nestled in their box, just waiting for future clues. Sunday can’t come soon enough as I can’t wait to see what Clue 3 will be. COTSIM is going to be a small quilt, so there’s loads of time to jump in and catch up easily. You can follow along with the clues starting here with Clue 2 on the Inklingo blog – links to Clue 1 and clue about fabric choices are in that blog post as well.

We don’t see this too often, so when we do a picture is taken very quickly!

© 2007-2019. All contents of Quilt Obsession are the property of the owner and cannot be reproduced or copied in any way without express written consent. Please respect my copyright.