The story begins with these floral fabrics that I found when I was searching for fabrics for my version of Valse Brillante. Which I am still, by the way, in the process of pulling. More about that later in the post.

Yes, I know that title is somewhat misleading. I love Carpenter’s Wheel quilts but never really wanted to make one because those are large blocks. But with the shapes for a 3″ LeMoyne Star, I realized I could happily be making 6″ Carpenter’s Wheel blocks. When I found those tiny floral prints I knew they were perfect for my mini blocks and the name for the quilt immediately came to me – Floral Wheel. And once I thought of that, it took seconds to pair a few of those little floral fabrics with batiks and a wonderful little dotted fabric for the background.

The first one is made. I’m only adding the squares in the corners at this point because rather than use QSTs for the edges, I’ll use squares to attach the block to one another. And I do have a plan for the corners where four blocks will meet. It’s a fun block to stitch. Lots and lots of continuous stitching possibilities and it goes together quickly.

I love the back after pressing. Even with all those small pieces, it’s easy to press particularly because I tend to finger press as I go.

I have enough shapes printed for four of these little blocks so far. And that may be all I make. I’m not sure yet. I think it would make a wonderful little wall quilt. And I’ll have made a Carpenter’s Wheel quilt, which is something I have wanted to do.

And what of Valse Brillante? Well, at this point it’s almost laughable as I have pulled so many different bits and pieces that the box I’ve been tossing them into is overflowing! But as shabby chic fabrics are my very favourite, I tend to keep quite small pieces and some of them are just the right size for Valse Brillante. There’s another, smaller box with batiks I’ve pulled for it. And eventually I’m going to have to sit down and start paring down the selection, as I’ve pulled far, far, far too many! But that’s probably going to wait until after the baseball season. Why? Because it seems that the Jays are really in this – finally, after 22 years!! And I’m on the edge of the couch for every pitch of every game, just don’t want to miss a thing. I will take a couple of pictures of the overflowing box to show – because it is truly laughable at this point, but I’ve got to start somewhere. Maybe I can get them winnowed down to the final selection before the regular season ends and the playoffs begin. Maybe.

I have spent a fair bit of time with a black and white scan of one of the pictures of the quilt in Millefiori Quilts, mapping out my plan. And as that plan for Valse Brillante is going to require a bit of concentration when stitching, I’ve decided it just can’t be my baseball pennant race/playoffs quilt. For that matter, I’m not sure any quilt will be. It’s possible I could end up sewing my finger to a piece of fabric!

Which leads me to a bit of a rant. Feel free to skip the rest of this post or just skip down to the ‘toon.

Our fabulous baseball team, the Blue Jays, have been playing spectacularly. They are pretty much Canada’s team and millions watch every game. Unfortunately, we’re also in the midst of an insanely long federal election campaign and the leaders of the three main political parties seem to have decided jumping on the Jays bandwagon is a good idea. Must be very appealing when they realize the sheer number of people in this country who are cheering for the Jays.

So first one shows up  – attends a game and the Jays lose, ending an 11-game winning streak. Then the second one shows up – to attend a game and they lose another game. Then they win the next two. At that point it was pretty obvious that the politicians were jinxing the games. The final proof was on Friday when the third leader showed up –  to attend the game. I looked at Mr. Q.O. and said, “Why watch?? They’ll lose! It’s the politician jinx again!!” And sure enough, they lost. And sure enough, they then won the next two. So finally, the three of them have agreed on one thing – and this is probably about the only thing those three will ever agree on – that they will stay away from the games during the campaign. So this is a plea to the politicians.

Please be fair. We can deal with the candidates at the door, the phone calls, even the negative ads on television (and thank the inventor of the remote control and the marvellous, wonderful mute button every time those irritating ads come on), but please, please don’t jinx the baseball team! That’s just not on! Nor is it fair! Very, very few of the players on the team are eligible to vote in the election. I’m not sure, but I doubt that many, if any, of the coaching staff are. I’m pretty sure the manager isn’t. So you’re not there to get votes from them. Hmmm — are you trying to get votes from us, the fans?? Well, jinxing the Jays’ games really isn’t the best way to garner any good feeling towards you!

Yes, we know going to a major league baseball game during a pennant race is fun. But let’s be honest – you’re not really there for the game. You’re there for the photo-op. If you truly were just there for the game, you’d not be showing up in your campaign buses and doing the photo-op thing on the field before the game and/or during batting practice. So please, please stay away even after the campaign!! Don’t attend any playoff games. Please don’t. The Jays don’t need any chance of that jinx remaining! If you truly are fans, come to a game next spring when we all start afresh. And hopefully none of the jinx from a political campaign will still be lingering.

Okay. Rant over. Well, almost over. 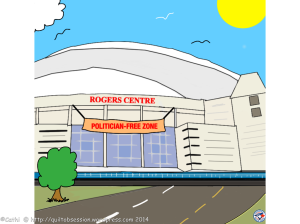 10 thoughts on “Floral Wheel and A Bit of A Rant”