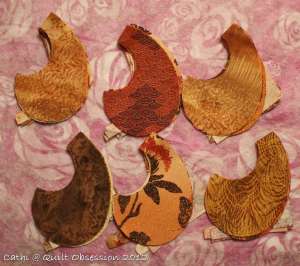 Yesterday I spent some time organizing my sewing table … again.  I did get a lot sorted out but was horrified to find that there are six more Memories of Smudge blocks yet to be made. They were nestled in under the shabby chic Yin Yang shapes. Lesson learned – keep projects in their project boxes and keep that sewing table organized! I only need five more blocks to add one more row to the top and will set aside the extra block for the quilt label. 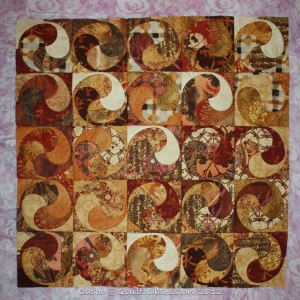 Today I’ll put the top back up on the design wall with the shapes that will become the new blocks and see if I can just add at the bottom of it and arrange them so that there will be yet more S’s or if I’ll have to take the top apart and rearrange the blocks with the new ones added in. I was lucky. Before I decided to start working on the sewing table, I was just about to cut the first plain border for Memories of Smudge. Had I done that, the border strips wouldn’t have been long enough. Something told me to work on cleaning up the table first.

So that will be my weekend sewing and/or unsewing – Memories of Smudge. Maybe, if I’m very lucky, I’ll be able to add that first border as well.

Last night we went to the opening night of a play in a small theatre. It was fabulous – a two-character play and a very interesting story. Mr. Q.O. had done some still photography for the production, had seen the script and knew the plot. I had only seen some of the photos, so was really intrigued.

And that inspired today’s Baxtertoon, where Baxter’s working on the special effects console.

I guess it’s official — time to start thinking about winter coming. Yesterday the gardeners came and took all the flowers out of the flowerbeds on the roof garden. It looks so barren out there now with the empty flowerbeds. Baxter spent a lot of time on the windowsill watching what was going on while the gardeners were working. The one plus is that with all the leaves gone from the trees, Baxter has a great view of the squirrels when they’re dashing around on the tree limbs.

We were lucky and got a photo of him with his reflection in the window.