When piecing by  hand, I’ve always tried to get my quilter’s knot slightly away from the end of a seam so that I don’t have to deal with it at an intersection when joining other pieces. A while ago, a friend sent me a link to a YouTube video showing a flat knot to use at the end of seams. I tried it for a while and love it. No more bulky knot. It is as flat as can be and that knot is not going to come undone.

So I started thinking about it and decided to try it at the beginning of a seam as well. I’ve been using it now for a week and am thrilled. No more bulky knot at either end of my seams. Just a lovely flat knot that really feels like nothing more than a backstitch. No little bump in the seam. Yeah, okay — I admit it, I’m really picky about those bumpy knots. They’ve always bugged me. Even when using an heirloom thread, I was aware of that bumpy knot.

For these shots, I used a red thread so that it would show up well. Normally I’d use a thread that matched the darker of the fabrics I’m joining. I’ve been really giving this knot a test for the past week, trying to tug the pieces apart and the knots absolutely do not budge. 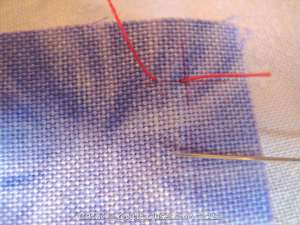 So how to do it? It’s easy. Instead of making a quilter’s knot to begin your line of stitching, just bring the threaded needle through. Leave a slight tail. 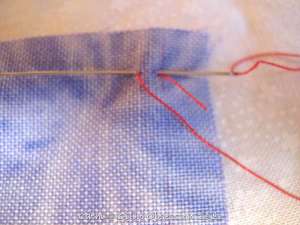 Take your threaded needle back through, as though making a backstitch. 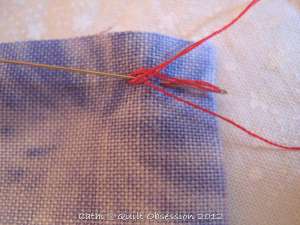 Then the magic begins. Bring the thread that’s in the eye of the needle up and under the needle in one direction. 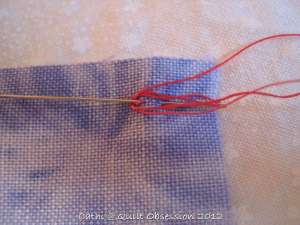 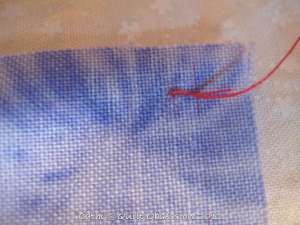 Pull your needle and thread through, give it a slight tug and the knot’s made. I do try to catch the little tail with the first stitch after the knot, but that’s not something I worry about if I don’t catch it. 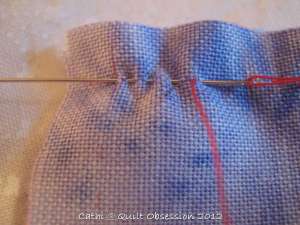 Stitch to the end of the seam and then it’s the same process all over again. 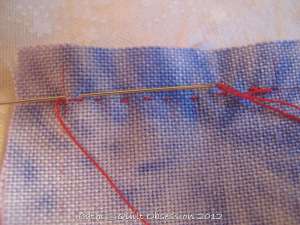 Start a backstitch at the end of the seam. 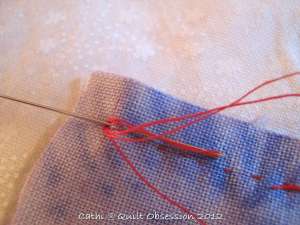 Bring the thread that’s in the eye of the needle up and under the needle going in one direction. 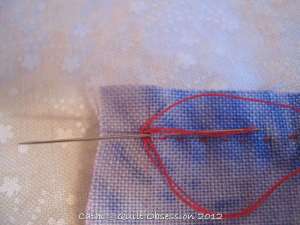 Bring the thread that’s part of the stitch up and under the needle going in the opposite direction. 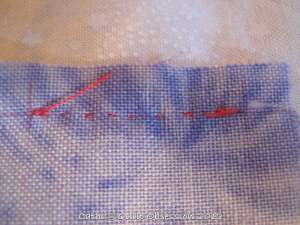 Pull the needle and thread through, give it a slight tug and clip your thread. Seam done. And not a bulky knot anywhere to be seen or felt. 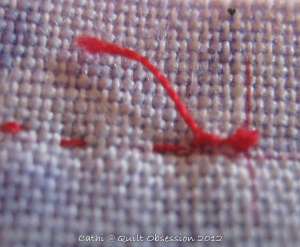 Try it and compare it to the normal quilter’s knot – the little bump at the beginning of this seam. I hope you’ll be as thrilled as I am.

The really pleasant surprise for me is just how much time it saves by not making the quilter’s knot to start every seam. I almost think of this as the hand piecers’ answer to machine piecers’ chain piecing. No more stopping to make knots. Just clip your thread, pick up the next pair of fabrics to piece and start the process all over again. Once you’ve done it a couple of times, it becomes second nature and very quick.

This is the video in which I originally saw the knot. The demonstration of the knot can be seen at about the 5:45 mark on the video. 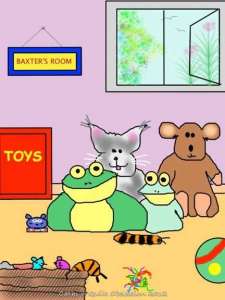 Baxter was hanging out with his frog and bear friends and toys in today’s Baxtertoon. Guess a quilter’s knot of any sort just wasn’t too interesting. 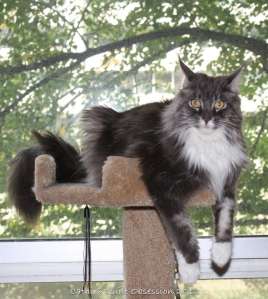 He was hanging out on his kitty tree on the weekend. This photo makes me laugh – what a pose, with his front legs hanging down like that.

16 thoughts on “Flat Knots When Hand Piecing – Lots of Photos”