This idea has been in the works for a week or so. Mr. Q.O. draws some fabulously fun creatures, so I asked if some could be drawn for the little hexagon quilt. So far he has drawn four or five and I’ve then traced them on to 2″ hexagons, which I had already printed and cut out. Three got stitched last night – a turtle, fish and frog. There are other fish and various other creatures who will show up periodically as I turn them into little 2″ embroidered hexagons.

The final layout of this is still far from decided, but I’m thinking it will be a small cot quilt when it’s done. It’s fun to do a few stitchery blocks from time to time.

We ran into a former neighbour who had some really exciting news. She has been accepted into the Nurse Practitioner Ph.D. program at Yale. Mr. Q.O. knew, before I said it, that I was going to decide she needs a lap quilt to take along with her to remind her of her time in Toronto. I think a fair amount of time is going to be spent on the weekend looking at possible design ideas. 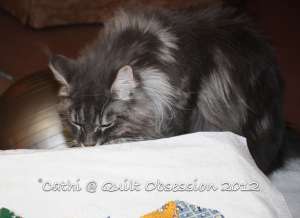 Mr. Q.O. captioned this shot, “The Critic.” The minute we start setting up to take photos, Baxter’s right there.