The centre of the Summer Plates top is together. The corner blocks for the border are done. With any luck, the entire top will be finished this weekend. That is one of my goals for the long weekend. The picture isn’t great as I was holding it up out of kitty reach. Baxter has decided that fabric is something he absolutely has to bite, which is making stitching of any sort rather challenging.

Another Dresden Plate variation is definitely in my future. The fabrics for it are tentatively picked out and I think I know which blades I want to use. Having all the variations that are available in the Fancy Pieced Dresden Plate Collection makes it impossible to resist making a third one.

Last night I was working on the red and white stars and ended up unstitching almost as much as I had stitched. Trying to keep things out of kitty reach and watching the baseball game at the same time as I was stitching wasn’t working out too well.

After a few attempts at getting at the red and white stars, Baxter was crashed on the pink chair. 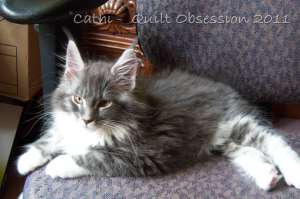 And a photo of him from the day before when he had claimed Mr. Q.O.’s computer chair as his and was awake. Getting photos of him awake is a bit of a challenge as he is usually dashing around, which would make for nothing but a very blurry photo.

Thank you to everyone who offered ideas on the bobbin-winding problem. I think the problem is solved now.