Mr. Q.O. started picking out fabrics last night for sunflower blocks. So far these are the fabrics he likes, although the specific combinations aren’t settled on yet. These are going to be very vibrant sunflowers. There’s a stack of other fabrics that he’s still considering, so this group is bound to grow.

Which brings me to the question. When I started to wind a couple of bobbins, this happened. It isn’t the first time that thread has wound on to a bobbin like this. Last spring when I went to Creativ Festival, I talked to one of the vendors in the Pfaff booth about it and she suggested that I hook the thread under the thread guide as it fed to the bobbin while winding. That clearly didn’t work for me. Does anybody have a solution to this? I have a Pfaff 1472.

Two Baxter photos today. A few minutes before this photo was taken, he was tearing around playing with toys, leaping on furniture and then, all of a sudden, he was sound asleep on the kitty scratcher which is also being used as something to chew. I don’t think it’s going to be long before it has to be replaced. 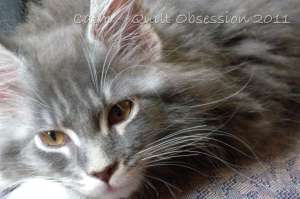 Earlier in the day, I got this shot of him in Mr. Q.O.’s computer chair.

16 thoughts on “Sunflower Fabrics & A Question”