Two more finished on the weekend. That’s 5 complete now, and now the decision has to be made as to the layout, as the ideas I have don’t require more full plates but rather half and three-quarter plates.  That will be a decision I have to make this week, as I really don’t want to stop making them for any length of time.

Finally – finally! – I managed to learn enough in EQ to design a quilt. I’m thrilled!!  It has been years that I’ve had EQ but had never really gotten anywhere with it. This weekend I just sat down and worked my way through it and was so pleased at the end. Now I understand why people like it so much — I was so tempted to play and design a few more quilts once I had made it through the first one, and have a feeling I’ll be doing just that sometime today. 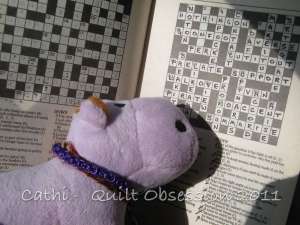 We’ve had what seems like weeks and weeks of rainy weather, which has meant very little in the way of adventures for Hugo. He was helping Mr. Q.O. do a cryptic crossword the other day. It’s about time for Hugo to leave here. However, I’m a bit concerned about sending him off anywhere as there’s the threat of a postal strike here and I’d hate for him to end up languishing in a box in the post office while a strike is on.

Smudge was absolutely tuckered out after one of his sessions at the water bowl on Sunday. Mr. Q.O. managed to get a video of him drinking which will be edited and posted sometime this week. 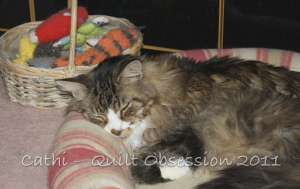