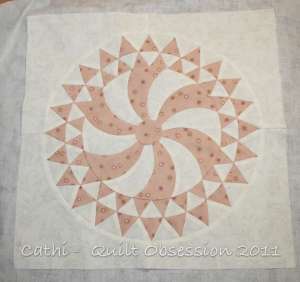 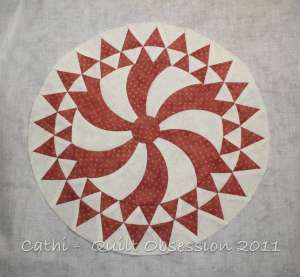 One that just needs the frame around it to square it up.

And a third which is awaiting its two bands of triangles.  I’ve decided to make the remaining blocks all at once.  It’s faster, I think, if I make the blocks up to the point of completing the addition of the two rounds of triangles and then, once the remaining 3 or 4 blocks are at that stage, I’ll add the frames to square them up all at once.  That’s what I’ve been working on this week.

We ran down to the hospital for a bit on Wednesday afternoon to meet Cameron, who was born late Monday afternoon, and to deliver his little quilt.  His father, who is the son of a quilter, wasted no time in making sure Cameron was cozy and warm with the quilt wrapped around him.

Thank you to everyone for your thoughts and messages about Lester — they were greatly appreciated and helped enormously.  Lester has been slowly recovering.  This is his third stroke and the recovery time has been longer this time.  As of Thursday night he’s eating on his own, drinking and even playing a bit with kitty toys.  It has been a roller coaster of emotions watching him, wondering how well he’ll recover.   We took no pictures of him this week until last night, when he was acting more like Lester, our house lion — lounging in the kitty bed near the kitty toy basket. We were, once again, extremely lucky.

There has been good news with Smudge as well.  He finally seems to be eating enough on his own.  So much so that Thursday was the first day in close to three months that there was no syringe feeding at all. Tuesday and Wednesday were rather tough days with syringe feeding necessary for both of them and then Thursday was like magic — they were both eating on their own.  Smudge was having a snooze after eating on Thursday night. 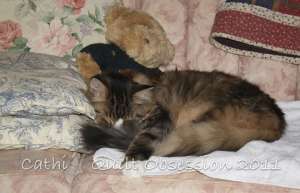 23 thoughts on “Farmer’s Delight in Stages”