While I’m still not quite ready to print the shapes for my first Rose Star block, choosing some possible fabric combos was definitely on. This is my first and favourite choice. Of course it is — pinks and greens.  It seems like ages since I’ve made anything that is predominantly pink. 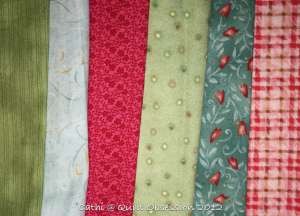 This is my second choice. Again, there are some pinks and greens in there. I’m detecting a real preference here. Both sets will likely have a neutral added which will probably be a white on white.

The heat and humidity yesterday was unbelievable and now Environment Canada is saying it’s going to be like this through the rest of July and August. Yesterday’s humidex reading got to 44C. Nobody was out on the roof garden. Today they say it will be somewhat milder with a humidex of around 36C. I can’t believe I’m saying that’s somewhat mild. 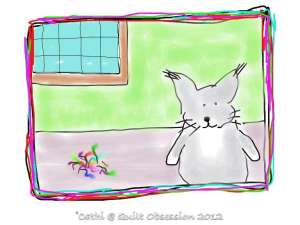 We went to PetsMart last weekend and got Baxter some new toys, one of which is a ball made of nothing but colourful fabric strips and he absolutely loves it. That’s what inspired today’s Baxtertoon, “New Toy.”

He knows how to stay cool – just stretch out on the couch.