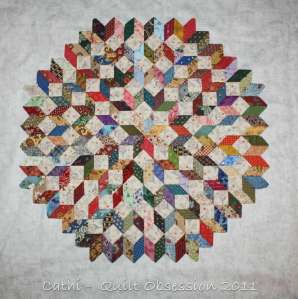 The star is growing. I’ll keep adding rounds until it’s wide enough for a lap quilt. Then I’ll sort out how to add length to it, possibly with a couple of rows of small stars at the top and bottom. The round of squares isn’t added yet, but that’s not going to take long. It’s adding the diamonds in each round that takes the longest, particularly as it grows in size.

Over the years, I’ve tried numerous thimbles for hand quilting and, while some of them have seemed better than others, all of them have eventually resulted in hand issues for me. Then I heard about this, the hand-held quilting thimble from the House of Quilting. After about half an hour of practising with it, I was thrilled. It’s simple to get used to, makes it easy to get small even stitches and doesn’t seem to cause any hand fatigue. It’s even easy to quilt through intersections where many seams meet. Over the next few days, I’ll spend some more time getting used to it and then it’s going to be time to get started on that stack of 14 tops waiting for quilting.

Baxter’s markings are starting to show more and more. He has two rings, one on either side, just at his shoulders which I’ve dubbed the Baxter crop circles. This photo was taken as he was resting up, waiting for yogourt time.  Yes, we have another kitty who loves a yogourt treat. When he sees the yogourt container come out of the refrigerator, he practically climbs up our legs to get his treat.