Making these stars is another one of those go-to projects for me when I’m tired and want an easy stitch. They’re made with 1″ diamonds and are so quick to stitch that one can get half a dozen or more done in next to no time. These were made last night.

They press beautifully. You can just see Baxter’s paws at the side, as he was trying his best to get included in the picture.

And then they got added to all these. The box in which I keep the finished stars is getting full, so I think I may have to start playing with a setting soon and have a couple of ideas I’ll try out. 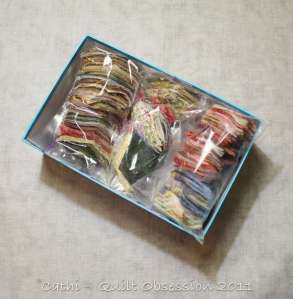 Yes, it’s another quilt(s) in a box project. This box has 2 rows deep of the little baggies, each full of the diamonds for stars. I have no idea how many hundreds of stars I’ll end up with, but I have plans for a couple of different settings. 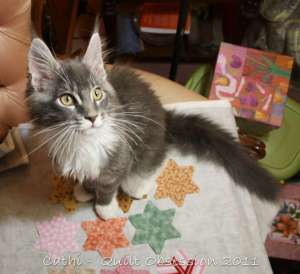 As usual, Baxter was right there amongst the fabric when we were taking photos.

Earlier in the day he was playing with Cappy. While the picture is a bit blurry, as he was moving, it really shows how much he’s growing. Yesterday was the first time he’s really played with Cappy. Within a few hours it was evident this is now his favourite toy. He was even sleeping with his head on it at one point.

8 thoughts on “A Bevy of Small Stars”