When I started the red and white feathered star/sunflower blocks, I thought I probably had enough of the white on white but wasn’t really worried about it as it seemed to be a staple WOW fabric at the LQS. That was, as it turns out, a silly assumption on my part and I had totally under-estimated just how much I’d need.

Over the past few months, the owner of the LQS has been trying her best to find me more of this particular white on white but hasn’t been having any success. Now I’m thinking that perhaps it’s out of print and my only hope is going to be that someone has it in their stash and is willing to part with it or knows of a store that has it in stock. I’ve put some of the other white on whites that I have next to it and they are just not going to work — the difference is quite obvious.

This picture is really only for scale with the penny on it as the colour isn’t quite right, although white on white is next to impossible to properly photograph anyway. It’s a very small-scale all-over print. 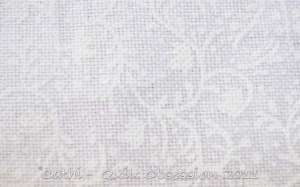 This picture is a bit closer as far as the tone of the white on white goes. It’s made by Santee Print Works and is what I think of as a very icy white on white. There’s almost a bit of a shimmer to it, although it’s not a metallic.

Six of the blocks are made but I need at least 6 more yards of it to make the remaining 7 blocks and pieced border to finish the quilt. I can use anything from FQ size on up, so if you can help and/or know where I can find this fabric please let me know!

Baxter was resting after another busy day on the windowsill, watching the squirrels and birds and falling leaves. We’re not sure what he was calculating, but his paw was firmly planted on the calculator.