I am not even close to finishing the Fiesta top. I keep forgetting that even though I laid out the blocks and thought I had the block placement all figured out, I’ve been changing it as I go — so it’s not … END_OF_DOCUMENT_TOKEN_TO_BE_REPLACED

The colourful Fiesta blocks are the perfect antidote to the grey days of winter that we’ve had so many of this year. I have enough of the fabric left to use in some other project that calls for some wild … END_OF_DOCUMENT_TOKEN_TO_BE_REPLACED

This book arrived and I want to make almost every one of the quilts in it! So it’s a very good thing I got Dance of the Poinsettias done before the book arrived. The cover quilt is called Fiesta Gitana … END_OF_DOCUMENT_TOKEN_TO_BE_REPLACED

I know, I know — it has been an extremely long time since I blogged. I am going to give it yet another try and hope to post twice a week — at least at first. I’ve missed blogging and, … END_OF_DOCUMENT_TOKEN_TO_BE_REPLACED

Where have I been? I’ve been around but had nothing quilt-related to write about or photograph. Thankfully, something finally jolted me out of the creative doldrums! It’s called Mariner’s Whirl, which is a Jinny Beyer design (Beyer 382-12) for which three … END_OF_DOCUMENT_TOKEN_TO_BE_REPLACED

I’ve now added ten of the 10-point stars to my version of Can Can, now Dance of the Poinsettias. I’d finished the little pink units I showed in my post on Friday and had actually already added one before I … END_OF_DOCUMENT_TOKEN_TO_BE_REPLACED

I need to make 10 of these for the next round of my Dance of the Poinsettias – which is now the name of my Can Can quilt, thanks to a comment left on my last post! I really am … END_OF_DOCUMENT_TOKEN_TO_BE_REPLACED

I had great plans to stay completely focused on Can Can/Poinsettia and was making progress. I really did. But there was a new Inklingo collection for a block called Starry Path that was seemingly destined to throw me off course. There … END_OF_DOCUMENT_TOKEN_TO_BE_REPLACED

Odd title, isn’t it? Once I had this much of the top together, I knew I was committed to making it. So it really did end up feeling rather like an assembly line for a while over the Christmas break … END_OF_DOCUMENT_TOKEN_TO_BE_REPLACED

The very golden, Golden Wedding Ring Two Ringy Dingies top is done!! I made my goal of finishing it this week and didn’t want to wait to post this. Edited December 23, 2018 – thanks to the efforts of … END_OF_DOCUMENT_TOKEN_TO_BE_REPLACED 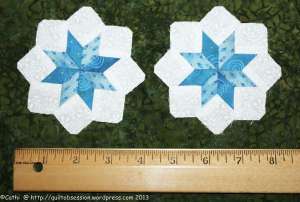 All of the little stars are now made and last night I started surrounding them with the white squares. It takes less than an hour to get two stars surrounded.

There are now 17 of the little stars left to surround with the white squares. From here on out, it’s just nothing but continuous stitching to add the squares, then the connecting red diamonds and octagons and turn this into a finished quilt top. If I can stay focused, and I am pretty intent on doing just that, I could have this finished by the end of next week and be ready to quilt it next weekend.

I may take some time out this weekend and get the binding ready for Candy Stars as well as start printing for the Inklingo Periwinkle reverse mystery quilt. I think I’ve finally decided on the colours I want to work with for the Periwinkle quilt. No big surprise here — it will be pinks, pinks and more pinks. Maybe a mauve thrown in for a little relief from the pink. Maybe. Lessons 1 to 4 are available, free, at the All About Inklingo blog.

If you’re here to see who won the giveaway from the April Showers post, the winner will be announced later this afternoon after Baxter picks a winner.

“Mum’s Making Stars” is the title of today’s ‘toon.

As we were setting up to take pictures of the two little blue stars, he was right there just waiting for his photo to be taken because, after all, there is nothing that we could possibly want to photograph other than him!